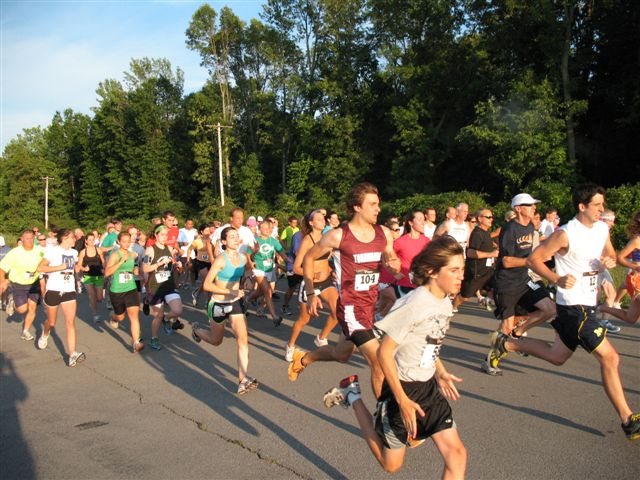 Niagara Hospice has announced the creation of the DiMino Lower Niagara 5K Series. Race directors for the Nancy Price Memorial 5K, the Jason Raby Memorial 5K, the Kiwanis Peach Festival 5K and the Hospice Dash 5K have teamed up to create this one overall race platform. The DiMino family, owners of Tops in Lewiston, sponsors the series.

Each of these events is dedicated to raising money for local charities, and to fund scholarships for local students. The committee members of each event are dedicated to providing Western New York runners an opportunity to participate in a worthwhile race while supporting a worthwhile local cause.

The race schedule is as follows:

Each race will supply runners with a Dri-FIT running shirt featuring the name and logo for the particular race. Each race shirt will be different, but will be unified by the new DiMino Lower Niagara 5K Series logo, which will be featured on the sleeve of the shirts.

Athletes who run all four races will be recognized at the Hospice Dash 5K. The running series will present trophies to the top three male and female runners by age groups, as well as a $500 cash prize to the overall male and overall female winner of the series.

To win the overall cash prize, the runner must run three out of four of the races, including the final race of the series. The top three total times will be added up, and the male and female with the fastest overall time will win.

Organizers say this new series is a great way to motivate people to get out there with their families, get exercise, have fun and support four local events that benefit a large number of people in the community.

For more information, or to register, visit www.hospicedash.com.

About the Individual Races

This is the 18th annual Nancy Price Run. Price was the recreation director who actually put the Youngstown recreation program on the map. She had Veterans Park in Youngstown built up to what it is today from just a field. She did this by grit and determination. She was a fixture at the park and became friend/parent to all the children who came by the park.

Price passed away from cancer far too soon. Today, this race seeks to carry on her hopes and dreams for the youth of the community. Proceeds from the event go toward the Nancy Price scholarships, which are given out to graduates from the area who posses the values she held and who are active in the community.

Since 2009, the Lewiston-Porter Alumni Association has sponsored the Jason Raby Memorial 5K Run and 1 Mile Walk. The event honors Raby, a member of the Class of 2001, who passed away suddenly while attending Niagara University.

During his time at Lewiston-Porter High School, Raby epitomized the ideals of hard work, commitment and dedication. He was an outstanding student and cross-country and track athlete. His life provides a great example for all members of the Lewiston-Porter community.

His dad, Gary Raby Sr., is a Lew-Port grad and a long-time cross-country and track and field coach at Lew-Port. Gary's commitment to the school, his love of family and community, has made the run a very special event.

The proceeds from the race support the many scholarship programs sponsored by the Lewiston-Porter Alumni Association.

The race begins on the Lewiston-Porter campus. The course is flat and fast. The post-race party is outstanding, with great food, prizes and live music featuring The Brass Monkeez. Details for the race and registration information can be found at www.lew-port.com on the alumni association page.

This year will mark the 34th annual Peach Festival 5K (aka the Fun Run). This race has been around longer than almost any race in the area. Each year, the race committee chooses a local charity to receive all proceeds. The charity for 2012 is still being determined.

KeyBank and The Kiwanis Club of Lewiston sponsor this race. It is the kick-off to the annual Peach Festival parade. The race begins in front of KeyBank on Center Street and runs through the Village of Lewiston.

In 2009, the Paul Beatty Jr. family began the Hospice Dash 5K race to benefit Niagara Hospice. The family is dedicated to raising money for Niagara Hospice to help support the special kind of care offered to families dealing with end-of-life illnesses.

The Hospice Dash 5K has a one-way course that runs along the shores of Lake Ontario and finishes at Porter on the Lake Park in Youngstown. The race features live music along the route, as well as a post-race party with more music, plenty of food and fun for the whole family.

Finisher medals are awarded to all runners; awards are given to the top three finishers in each age group.

The Hospice Dash 5K has grown so much that a half-marathon was added to the event in 2011. The half-marathon has a new name this year, "The Mighty Niagara Half Marathon" and is expected to draw runners from the northeastern U.S. as well as Ontario. The half-marathon begins at 9 a.m. at Artpark in Lewiston and finishes at the Porter on the Lake post-race party.