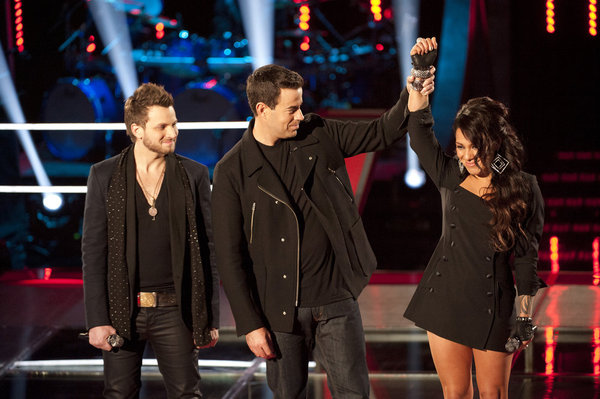 Jordis defeated Brian Fuente in the first "Battle Round" on "The Voice." (photo by Lewis Jacobs/NBC)

'The Voice': Singers not in love with 'Battle Rounds'

In the "Battle Rounds" on "The Voice," coaches Christina Aguilera, Cee Lo Green, Blake Shelton and Adam Levine pit their respective team members up against each other, pick the winners, and thus cut the field in half.

This part of the show is fun for television audiences to watch, as singers masterfully duke it out for a spot in the live rounds. But for the performers involved, the process of sending a teammate home is far from pleasant.

"The battle part of it, it's just not in, I think, any of our nature as musicians, you know?" Team Blake's Jordis said last week following her defeat of Brian Fuente. "We do things productively together, and we learn from each other, and all those things. And it felt like at any point of this performance was a dark place, and I really didn't ever want to see the end of it. I'm really, really glad it's over, and I really, really long to see my friends, (but not) go home at the same time. But I'm ready to move on and, you know, hopefully I get really, really far."

"We don't do what we do to battle," said Team Christina's Jesse Campbell. "We do what we do because we love it, and it's from a place of love, and it's a collaboration."

Through the singers had nothing but kind words for their departed teammates, they realized someone had to go home - and they weren't volunteering.

"My personal trainer said, 'Hey Jesse, it's a competition. You got to go out there and fight, because if you do not, then you can get sent home and (you) will be on the outside looking in. So, (you) got to do what you need to do.' " Campbell said.

More amazing sing-offs continue tonight - and more musicians will be sent home - when "The Voice" airs at 8 p.m. on NBC.