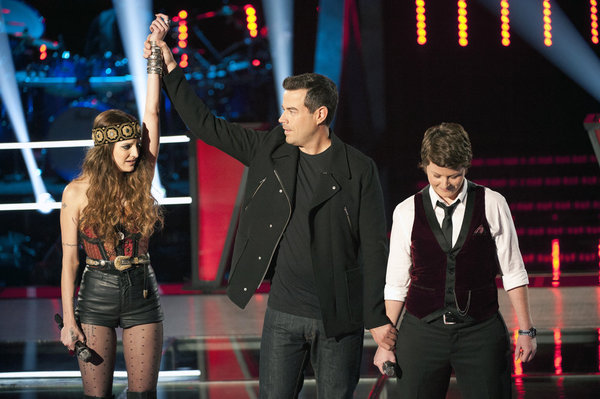 Juliet Simms (left) is declared the winner by host Carson Daly. She defeated Sarah Golden in the "Battle Rounds." (photo by Lewis Jacobs/NBC)

Last night on "The Voice," six more artists advanced to the live shows after winning vocal battles against a member of their own team. It was the second of four battle episodes that have the coaches narrowing down their teams according to what they like best. The battle pairings and results were as follows:

During the battle rounds, coaches pit two of their own team members against each other to sing the same song together in front of a studio audience. After the vocal face-off, coaches must then choose between their two artists to determine who will continue on in the competition.

At the end of the battle rounds, each coach will have six members remaining on their respective teams as they head into the live stage shows in April.