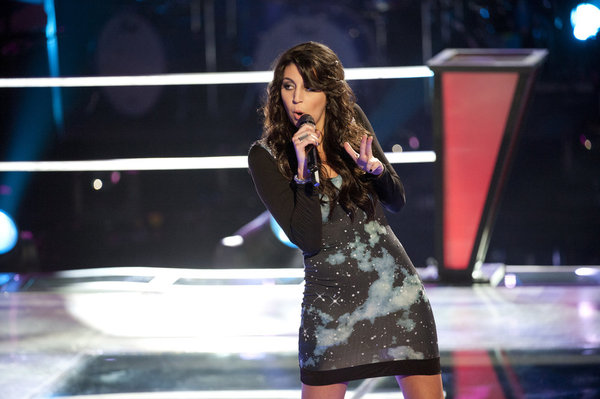 Charlotte Sometimes performs on "The Voice." (photo by Lewis Jacobs/NBC)

Singers starting to emerge from pack

Last week's "Battle Round" performance on "The Voice" shined a new spotlight on three of the show's best performers. Heading into April's live performance episodes, Charlotte Sometimes (Team Blake), Juliet Simms and Jamar Rogers (Team Cee Lo) are at the head of the class - and atop our Week 2 Power Rankings.

Charlotte had, perhaps, the night's top performance, outshining the talented Lex Land in a "Pumped Up Kicks" duet. Impressively, she won the sing-off without resorting to any over-the-top vocal Olympics (like we've seen 10 million times on reality television).

"I think that this song didn't really call for a lot of risks because it's a very - it's a stable song. So I just - I just sang it like the way that I - that I felt it needed to be sung," she said.

It's an interesting strategy she plans to use as she moves forward.

"I don't think I should ever attack a song in a way of thinking that I need to take vocal risk," Charlotte said. "I want to sing for the song. I work as a songwriter, so I want to sing for the emotion of the song and not to sound like the best singer. And not to sing like, yes, I can hit a high E in a ballad and I can do runs; I can do all that stuff, but I just don't necessarily think that's always what people want to hear, and ultimately I want to serve the song and not myself."

Rock star Juliet seemingly had an advantage over the soft-spoken Sarah Golden in performing Rod Stewart's "Stay with Me." Her distinctive, gravelly voice is custom made for such a song. But she scoffed at the idea Sarah was the underdog.

Be that as it may, the Automatic Loveletter frontwoman has, to the delight of her fans and bandmates, positioned herself to win "The Voice" and land a lucrative deal with Universal Records. Her victory over Sarah was her second stellar performance on "The Voice."

"My fans have been nothing but, like, so supportive and so, you know, involved in a way where they've started their own little, like, 'Juliet Simms Army.' And I swear to god there's like a captain and a general. I'm not kidding. It's crazy. It's amazing," Juliet said. "My band members - I mean, honestly, the band, you know, I had always been the songwriter for the band and it was always kind of my band and my thing. And like, you know, I would have band members come and go and I would say that the few that did stick around in the band are nothing but supportive. And, you know, they have their own things going on as well.

"And I mean they're just like - like my brother, for instance, was my guitar player for a long time. And he was over at my house last night like totally watching the show and rooting for me and, you know, he's been nothing - I've gotten nothing but support. And I feel so fortunate with that."

Jamar, meanwhile, continues to win fans with his supreme singing ability, his boundless energy, and his enthusiasm for life. He has become a positive role model for those with HIV.

"Well, you have to understand I decided a long time ago that I just wasn't going to be a miserable person," he said. "I seriously (did). And living in New York, if you're not careful, some abrasiveness can rub off on you, you know?

"So every morning I wake up, I take a good 20 to 30 minutes and I just spend some alone time with God. If I don't spend that alone time with God, I'm a jerk. I just want to put that out there: I'm not a nice guy. I'm very self-serving and I'm very, just, human. I'm just a human being. However, I find that if I spend that alone time it kind of puts everything into perspective. Not just this competition, but kind of why I'm living and what it is I'm supposed to accomplish for that day.

"So please understand that I am not naturally joyful. I've got - I got to work at that."

Ever humble, Jamar advanced after outshining his friend, Jamie Lono, on "I Want to Know What Love Is."

While television critics and fans of "The Voice" are mentally ranking the singers, the performers are, more or less, quarantined from such talk.

"I mean, I think we're all pretty isolated," Charlotte said. "I think, I mean, we were just talking about this before. We try not to lean on the negative comments or those (ranking) comments, you know?"

"I mean music and voices are so subjective, as well as personality. So I think, ultimately, I have no idea what's going to happen," she added.

Find out which other singers will rise to the occasion when the third "Battle Rounds" episode of "The Voice" airs tonight at 8 p.m. on NBC.