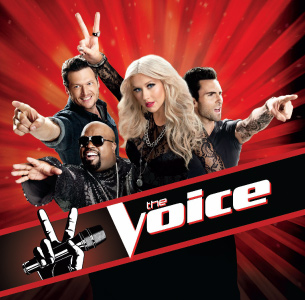 'The Voice': Meet the first 13 singers

Jermaine Paul had already found success in the music industry. It just wasn't his own. The husband and father of four was a back-up singer for A-list performers Alicia Keys and Mary J. Blige.

He entered "The Voice" to make his own aspirations of musical stardom a reality.

"Well, I'm a family man - a father of four. And I've always worked hard to support my family, and for years I had a steady gig and it was great. And it's been great. But one thing within that, you know, there's always been that dream of doing it myself, and really having my own chance out there," Paul said. "Before, you know, I think I was about 16, 17, I had a situation with a couple record companies that were interested, and that didn't work out. And then, by the time I was 19, I was starting a family. So it was always supporting my family. It's always been the main focus for me.

"But deep down I've always wanted to give my - give a solo career a try. And, you know, I just felt like it was a now or never thing. You know, when you've got your little girl looking at you - my daughter looking up at me telling me, 'Daddy, you should try this, you should this,' you know, that right there just ... that said it all for me to go ahead and give it a shot."

Gwen Sebastian, meanwhile, put her family on hold to audition for "The Voice." She and her drummer boyfriend, Louie, agreed to postpone having children so she could pursue her dream. She said it was a hard decision, but a worthwhile investment in her career.

"Absolutely, totally, especially - you know, especially after getting this opportunity. It's the most incredible thing that's ever happened to me," she said. "And watching it (Monday), it was like reliving that moment and then seeing (Louie) there and reliving everything that we were talking about that day. It just really, really sunk in. Yes, absolutely. I'm totally - I'm so happy that I made that decision."

Former Air Force analyst Angie Johnson benefitted from "The Voice" host Carson Daly, who Tweeted about her YouTube video. Impressed with her cover of Adele's "Rolling in the Deep," he shared the performance with his 122,000 followers.

But Daly wasn't the first person to notice Johnson's talent.

"Throughout my career, I always sang anthems and stuff for different promotion ceremonies, different retirement ceremonies, and I got asked to audition for Tops in Blue," Johnson said. "After Tops in Blue, which was a one-year temporary duty, I got asked to join the Air Force Band, and the Air Force Band is a full-time position. This was all while I was active duty, and I served a six-year active duty term."

Remarkably, the stage-savvy singer didn't have any formal training growing up.

"Well, prior to being in the service, I really didn't have a lot of musical experience. I joined when I was 19 years old, and I really just sang at musicals in school. I had some solos in choir and I sang in a little church group called The Pleasants. That was the bulk of what I had done prior to joining the military," Johnson said. "Once I joined the military and became a member of Tops and Blue is when I really started learning how to be an entertainer and how to be a performer. And then that kind of positioned me to be able to audition for the Air Force Band. All of those years of just entertaining troops is where I learned how to be a showman, and I don't really have a lot of commercial experience at all."

Perhaps none of "The Voice" singers is less experienced than Lindsey Pavao. Prior to her TV appearance, the Sacramento, Calif., bartender's largest audience was less than 50 people. Performing at a community center once, her voice cracked and she stopped cold.

But Pavao went into her "Voice" audition with a different mindset.

"The whole time the audition was going on, I was like trying in my head to turn nervousness to excitement. I just kept saying, 'This is really exciting! This is good! This is not like the scariest thing you've ever done in your entire life,' " she said.

The success of Pavao's performance has given her newfound confidence as she moves forward in the competition.

"Yes. Going into it, I think at every stage of the progress of getting to that blind audition, I was just so amazingly surprised and I was just like, 'Man, singing in front of these people is going to be awesome. I don't really think anybody is going to turn around, but that would be amazing.' When three of them did, it was like probably the most beautiful affirmation I've ever had - just kind of realizing that what I love to do, people might actually like what I do too," Pavao said. "It was great and, moving forward, I mean, it's just made like everything I've been thinking and wanting in life, I feel like I can really go for now. It's great and it just motivates me 100 times more to get my art out there and my songs. It's great - it's probably one of the most proud moments of my life so far."

•Click here to read Part I and learn more about Jesse Campbell and Juliet Simms.

•Click here to find out more about "The Voice."