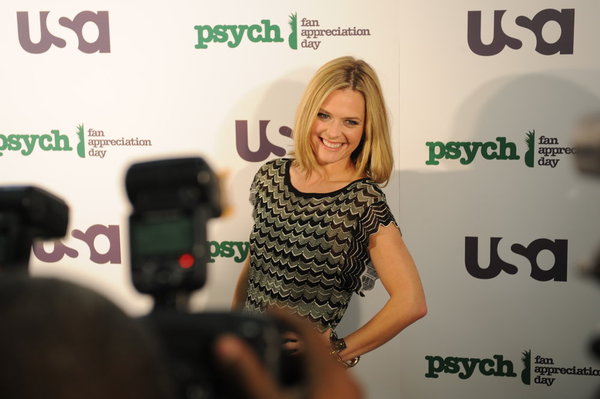 Our long drought is over: "Psych" is back.

It's hard to believe, but "Psych," the USA Network's longest-running original series, has been off the air since December. The witty, '80s-loving hit show revolves around fake psychic/brilliant observer Shawn Spencer (James Roday), his best friend and man of a thousand nicknames, Gus (Dulé Hill), and their adventures solving crimes with Santa Barbara police detectives Carlton Lassiter (Timothy Omundson) and Juliet O'Hara (Maggie Lawson). "Psych" is incredibly clever ... and it's been gone for far too long.

Fortunately, it seems as if the show's absence has made its fans' hearts grow fonder. The cast and crew flew to the Big Apple last week to participate in a successful fan appreciation day -- they kicked off trading at the New York Stock Exchange, too -- and Twitter is abuzz with "Psych"-related Tweets.

"That was so incredible; it was overwhelming," Lawson said Tuesday of the fan event. "So many people came out and everyone was just so excited and gracious. It was overwhelming. I couldn't believe it.

"We just had so much fun. We really do have, I think, the greatest fans in the world. They have been supportive. I mean, we played these games on stage with some of the people in the audience. People would have to name as many of Gus's nicknames as they could. It went on for a while. It's crazy."

"It reignites that spirit and everything we already have for the show," she added.

On the verge of the sixth season (premiering tonight at 10 p.m.) Lawson said fan reaction is "just so lovely and surprising and exciting."

"You get a little bit worried, when you normally premiere in the summer, and you're premiering in the fall now," she said. "It's like, 'Ah, are they going to be there for us in the fall?' And I feel like it's almost generated more of an excitement for the show to come back for season six."

And while "Psych" has grown more popular with TV critics, Lawson said the greatest acknowledgment still comes from the "Psych-Os."

"Psych" returns with questions stemming from the season five finale. In that episode, Lassiter caught a glimpse of a newly coupled Shawn and Juliet and, suffice to say, he was shocked. In tonight's premiere, he's quick to try and find out what happened and why (and there may or may not be a lie detector involved. Genius!).

"I kind of loved it. I loved reading it," Lawson said. "Juliet and Lassiter are very, very close -- they are family. I thought it was a really interesting way to go, with the lie detector. To see how protective he is. ... It's less about 'How could you date someone in our workplace?' and more about 'How could you not share this with me?' and 'How could you keep this from me' and all of that.

"It was more about his hurt -- because we're so close -- that he wasn't let in, and then it was about protecting me and telling Shawn, 'If you hurt her, I will harm you.' So, it comes from a place of family -- that unconditional love that you have for somebody."

"Psych" has become the go-to place for guest starring roles. In season six, the show rolls out the red carpet for some of Hollywood's most iconic performers, including Danny Glover ("Lethal Weapon"), Cory Feldman ("The Lost Boys"), Malcolm McDowell ("A Clockwork Orange"), Louis Gossett Jr. ("Enemy Mine") and Kristy Swanson ("Buffy the Vampire Slayer").

Oh, and someone by the name of William Shatner is playing Juliet's father.

"I can't say enough about him. He is -- it was incredible. He's a wonderful man," Lawson said of the man behind "Star Trek's" Capt. Kirk. "James calls him 'The Terminator' because he just, you can't believe how hard this guy works.

"And then ... he was playing my dad. For him to come up and take such an interest in me, and to know all of these lines, he's such a pro. He had as many lines as Shawn in the episode.

Lawson said she was in "shock" when she heard Shatner was cast to play her TV dad.

"I was absolutely speechless," she said. "I have my brother as (WWE superstar) John Cena, who's awesome. When they told me it was going to be William Shatner playing my dad, I literally did have a moment of laughing and being like, 'You're kidding, right? Is this a joke?' And then he showed up and was as lovely as a man can be, and I did have to, sort of, pinch myself in the scenes that we were doing together."

"Psych" airs Wednesdays at 10 p.m. on USA. Follow the show online at http://www.usanetwork.com/series/psych/.