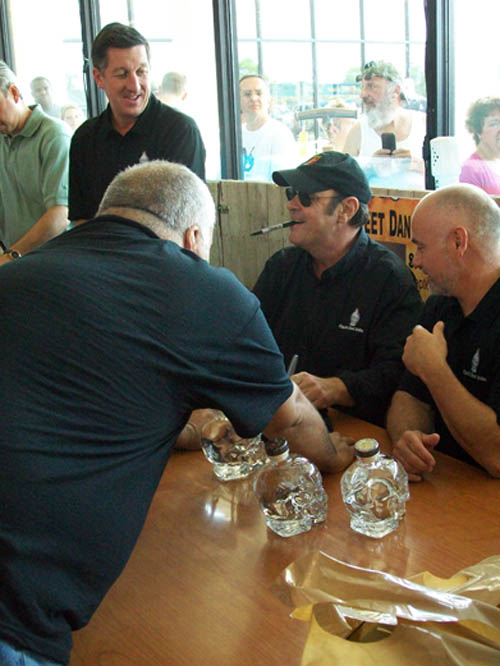 While actor and musician Dan Aykroyd isn't a god, that didn't stop legions of fans from telling the "Ghostbusters" and "The Blues Brothers" star "We're not worthy!" when meeting the iconic performer Saturday at Supermarket Liquors in Niagara Falls.

Almost two hours before Aykroyd's scheduled appearance - he was in town to sign bottles of his Crystal Head Vodka - fans started lining up outside of the Military Road retail store. For two-plus hours after Aykroyd began the meet-and-greet, that line stretched the perimeter of the building, out the door, and around the neighboring Wine Stuff & More. Supermarket Liquors President T. Chris Castellani said between 800 and 1,000 people showed up to meet the entertainer.

"Well, you know, I've been around a long time," an amused Aykroyd said. "It's like coming to see the tyrannosaur, I guess."

The Canadian actor, who began his career on "Saturday Night Live" in the late '70s, said, "It's very gratifying.

"I love seeing what people bring me to sign; what they're wearing; what they're drinking; what they're listening to in terms of music. For me, it's a frontline retail experience that I never had in the motion picture business or the record business - well, maybe I'd sign in record stores. In the picture business, we'd put the movie out and maybe meet people on the rope line on the red carpet going in. But that was it. Here, I get to see the consumer, meet the consumer, and have them come and enjoy.

"Let me put it this way: I put music in their ears, I put visuals in their eyes, and now I get to put something on their tongue."

That something isn't just anything. It's an award-winning vodka distributed in a unique crystal head designed by artist John Alexander.

Aykroyd and Alexander, both fans of the mythological 13 crystal skulls - 5,000-year-old archaeological finds offering no clue on their formation - sought to do something special with those images. Once their idea was formed (allegedly on a napkin) and the bottle was shaped, the question was what to put inside of it.

The Crystal Head Vodka website states, "Vodka became the drink of choice. But with it, a commitment to do something enlightened and different."

The vodka is all-natural: Newfoundland water is quadruple distilled and filtered through Herkimer crystals.

"Well, I love the bottle, of course," Aykroyd said. "And as I consume it more - in moderation, of course - I am liking the cleaned-up flavor. That's what won us the double-gold medal at the World's Spirit Competition in San Francisco for 2011. The difference between this vodka and a lot of other vodkas is that we have no additives. If you open up a lot of vodkas today they'll smell like perfume or shaving gel. Ours smells like what it should: just unmasked alcohol. We have no glycol, no raw sugar and no citrus oils in this vodka. And people are responding to the cleaned-up taste.

Personally, "I like the sweetness that comes out of our St. Thomas peaches and crème corn, which we put into the mash," Aykroyd said. "Our notes are sweet, vanilla, dry, crisp, with a kick of heat off the finish. That's what we wanted to achieve. We didn't want to mask the alcohol, like was done in the '70s. So, we're really pleased that we don't only have a beautiful bottle and design package to talk about, but we really do have it in the bottle. It's been great to get the approval from the industry on that."

"We knew the package would get us attention," Aykroyd said. "We've reached a certain level now. Now, we've got to push it up and do the marketing to make people realize that it's not only the package. There really is an award-winning fluid in the bottle that makes it worth the money."

While Supermarket Liquors consumers purchased the $44.99 750-milliliter and $89.99 1.75-liter Crystal Head containers (about 450 in total), many of them brought copies of movies, posters and albums for Aykroyd to autograph.

Castellani said the jovial Aykroyd was very grounded, and took time to meet each fan and sign just about anything he was presented.

"He was a very classy gentleman," Castellani said.

So, what about the long-awaited second sequel to the film?

"We're writing the 'Ghostbusters 3' movie now," Aykroyd said. "We're working on that." He speculated the film could start shooting in April 2012. It's rumored the original cast (including Aykroyd, Hudson, Bill Murray, Harold Ramis and Annie Potts) will turn its proton packs over to a new team comprised of actresses Anna Faris ("The House Bunny"), Alyssa Milano ("Charmed") and Eliza Dushku ("Buffy the Vampire Slayer").

The original "Ghostbusters" picture grossed more than $280 million in 1984, and resulted in a cartoon series, a knockoff, and a big-budget sequel in 1989.

Aykroyd also is a founder of the Houses of Blues live music restaurant chain. He's hoping to secure a franchise in the Ontario region.

"We're trying to bring one to Toronto. That would be really exciting if we could do that," he said.

While in Niagara Falls, Aykroyd received the "key to the city" from Mayor Paul Dyster.