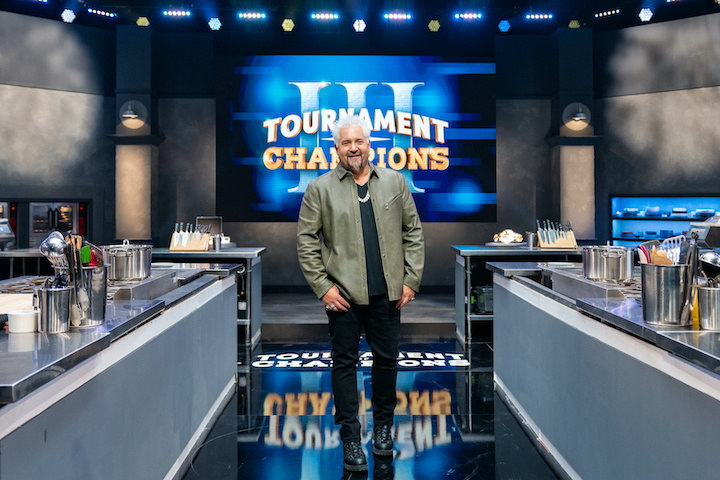 The skills and abilities of the most talented chefs from the East Coast and West Coast will be pushed to the limit in the most difficult bracket-style culinary competition. This year’s lineup features 14 tournament rookies who are on a quest to shake up the competition. The pressure is intense, and emotions are high as the elite chefs do not know who their opponents will be and what cooking challenges they will face, with the latter determined by the dreaded “Randomizer.”

This season, Guy has added a twist with “Randomizer” wild cards that progressively get harder and harder in each round. Each battle will feature blind judging by a rotating panel of judges consisting of the biggest names in the food world, as the chefs watch their critiques from backstage. For this year's finale, Guy is pulling out the ultimate wild card by inviting a surprise judge who is one of the most respected and revered chefs in the world.

After eight weeks and 31 grueling head-to-head battles, one talented chef will win it all and be crowned champion, taking home the coveted “Tournament of Champions” belt and a $100,000 cash prize.

Before the competition begins fans can look back at the “Road to Tournament of Champions IV” in an hour-long special on Saturday, Feb. 11 (11 p.m. ET), on Food Network. It will feature the most outrageous “Randomizer” combinations, the biggest victories, fiercest rivalries, and the most shocking upsets.

“ ‘Tournament of Champions’ is the most intense culinary competition ever created. We've got single-elimination, sudden-death, head-to-head blind battles and judging,” Guy said. “But of course, every year we’ve gotta up the ante, so we made the competition even more wild and unpredictable with the introduction of wild cards in every round. Get ready for some big-time surprises!"

“ ‘Tournament of Champions’ is consistently Food Network's highest-rated series with nearly 11 million viewers at the edge-of-their-seats last season,” said Betsy Ayala, senior vice president of programming and development, Food Network “This season will not disappoint. We have some of the most impressive competition chefs to date, alongside some very talented fresh new faces. Don’t expect to know who’s going to win, because this season it’s truly anyone’s game.”

Simon Majumdar and Justin Warner deliver real-time play-by-play as all the action unfolds in front of a live audience. Hunter Fieri follows all the action backstage, capturing competing chefs’ reactions as they watch the rotating panel of food icons blindly judge their dishes and learn who is moving ahead and who is going home.

Fans can join the conversation on social media using #TournamentOfChampions for weekly live Twitter parties, and across Food Network’s Facebook and Instagram find an insider’s look at the competition, as well as all-new videos with Guy, the competitors, and the judges every week. On FoodNetwork.com/TournamentOfChampions, fans can also browse behind-the-scenes photos and binge-watch clips. Beginning Monday, Feb. 13, fans can enter the “Tournament of Champions Bracket Sweepstakes,” where they can build their own brackets and decide who they think will win every round – and share their picks on social media to enter for a chance to win huge cash prizes all season long.