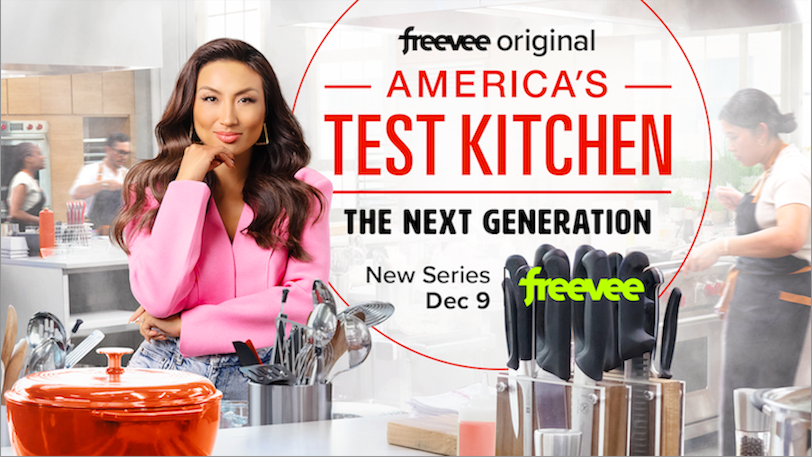 Home cooks from across the country will compete to see who has what it takes to join the coveted America’s Test Kitchen team on Amazon Freevee’s new original series, “America’s Test Kitchen: The Next Generation.” The 10-episode series, hosted by Emmy-winner Jeannie Mai Jenkins, premieres Dec. 9, with new episodes airing weekly until Feb. 10, exclusively on Amazon Freevee in the U.S. and U.K.

Each of the 11 contestants competing will present their dishes throughout a series of challenges that test their culinary abilities and on-camera personality. Each week, the contestants will stand in front of the judges’ panel, composed of “America’s Test Kitchen” icons Dan Souza, Elle Simone Scott, Jack Bishop and Julia Collin Davison, as well as special guest judges. The last cook standing will get the job of a lifetime – becoming the newest face of America’s Test Kitchen, the opportunity to write their own cookbook, and a $100,000 prize to fund the culinary business of their dreams.

Dan Souza, editor-in-chief of Cook’s Illustrated, is the only person who would research and catalog the six different ways of eating corn on the cob, or attend ice cream college just so he could create the ultimate at-home recipe. Dan is an on-screen test cook and science expert for “America’s Test Kitchen” and the host of the popular YouTube series “What's Eating Dan?” He has contributed content to a dozen America’s Test Kitchen cookbooks, including the New York Times best-seller “The Science of Good Cooking” (2012) and “Cook’s Science” (2016). Dan cut his culinary teeth as an apprentice in Hungary before graduating first in his class from the Culinary Institute of America. However, after cooking in restaurants in New York City and Boston, he found his true calling: Helping people make great food at home.

Food-styling guru Elle Simone Scott is a trailblazer who manages to make food both stunning and approachable. She shapes the visual aesthetic for the “Cook’s Country” brand, and her work appears across ATK media platforms. Elle is an on-screen test cook for “America’s Test Kitchen,” and is the star of a new show currently in production – “Entertaining with Elle” – which showcases her skills as a cook, teacher and stylist. The new show will premiere in 2023. Elle provided food styling and expert advice for “Boards: Stylish Spreads for Casual Gatherings,” a best-selling, highly regarded cookbook released in April. In addition to her role as an executive editor at “America’s Test Kitchen,” Elle also uses her platform and her organization SheChef to advocate, mentor and inspire other women of color in the food space.

Jack Bishop, who began cooking at the age of 13, is the patriarch of America’s Test Kitchen. Jack leads the creative teams working on the company’s television shows, podcasts, videos, magazines, books and online cooking school. Jack was part of the original team that started America’s Test Kitchen, beginning with the launch of Cook’s Illustrated in 1993. Jack directed the launch of Cook’s Country magazine in 2005 and the building of the company’s book publishing division. He is the tasting lab expert on “America’s Test Kitchen” and “Cook’s Country.” Jack is the author of several cookbooks, including “Vegetables Every Day” and “The Complete Italian Vegetarian Cookbook.”

Julia Collin Davison is America’s most experienced cooking instructor. In her 20-plus years at America’s Test Kitchen, it is estimated that Julia has sampled and tested over 20,000 recipes! Julia began working as a test cook for Cook’s Illustrated in 1999 and led recipe development for America’s Test Kitchen cookbooks for more than a decade. She is currently an executive editorial director and is also an original cast member and co-host of “America’s Test Kitchen” and “Cook’s Country.” Julia received an Augie Award from the Culinary Institute of America and was inducted into the prestigious Disciples d'Escoffier culinary society in 2018.

Jeannie Mai Jenkins is an Emmy Award-winner who co-hosted the nationally syndicated talk show “The Real” for eight seasons. She can currently be seen as a sideline correspondent for ABC’s extreme mini-golf competition series “Holey Moley,” currently in its fourth season. In 2018, Mai and her fellow “The Real” co-hosts received a Daytime Emmy Award for Outstanding Talk Show Host. The show received multiple Daytime Emmy nominations for Outstanding Talk Series, and received an NAACP Image Award for Outstanding Talk Series. In 2020, Mai competed on season 29 of the hit ABC series “Dancing with the Stars.” In May 2021, Mai was included in the Gold House A100 list, recognizing the most impactful leaders in the Asian community.

In 2019, Mai launched her weekly web series, “Hello Hunnay,” which takes fans on her journey through fashion, fitness, food, finances and relationships. As a self-described foodie, she enjoys the art of cooking and often showcases cultural cuisines with her family across her social platforms. Mai also hosts the podcast “Listen Hunnay,” where she interviews everyone from sex therapists to divorce lawyers and morticians to crime scene investigators in an effort to understand the journeys at the heart of the human being behind the career. Mai partnered with Owl’s Brew, a leader in tea-based spiked and sparkling beverages, as chief brand officer, assisting with new product innovations and overall brand strategy. In addition, Mai recently launched her first fashion collection in collaboration with Macy’s, Jeannie Mai x INC.

America’s Test Kitchen has been teaching home cooks how to be successful in the kitchen since 1993. Its mission is to empower and inspire confidence, community and creativity in the kitchen. Millions watch its two shows on public television, read its two flagship magazines (Cook’s Illustrated and Cook’s Country), and rely on its books, websites, videos, podcasts and educational products for children.

America's Test Kitchen is located in a state-of-the-art Boston facility with 15,000 square-feet of test kitchen and studio space. More than 50 test cooks exhaustively test recipes until they arrive at the best version. A panel of 60,000 highly engaged volunteer home cooks provides detailed feedback on their recipes so they know they work every time. ATK also rates cookware and supermarket ingredients to help home cooks select the best-quality products.

The “America's Test Kitchen” television show launched in 2001, and the company added a second television program, “Cook's Country,” in 2008. “America’s Test Kitchen Kids” launched in 2018 and offers books, subscription boxes, and a website to educate the next generation of home cooks. Learn more at https://www.americastestkitchen.com/.

Amazon Freevee is a free, ad-supported streaming video service with thousands of premium movies and TV shows, including originals and FAST channels, available anytime, for free.