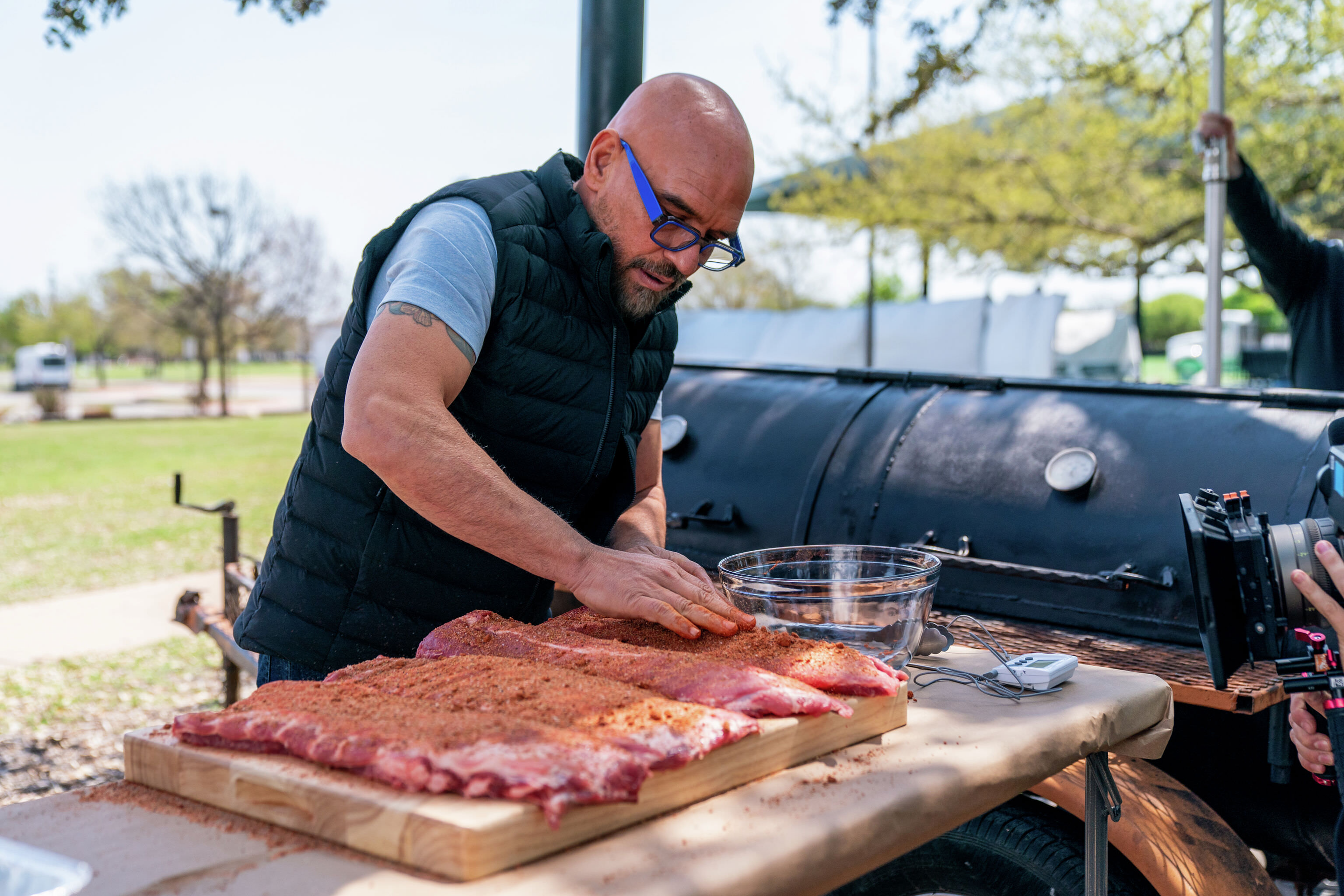 Food Network star, award-winning restaurant owner and New York Times best-selling author Michael Symon is headed to the biggest and toughest barbecue competitions across the country to bring viewers a front-row seat to all the action in the new primetime series, “BBQ USA,” premiering Monday, July 11 (9 p.m. ET/PT), on Food Network. Through six one-hour episodes, Symon showcases the talented teams that work tirelessly at honing their craft to prove they are the best in the barbecue world, while also talking with the most diehard fans, and of course tasting all the delicious ‘cue from all over America – including fall-off-the-bone ribs and smoked brisket.

All episodes of “BBQ USA” are available to stream weekly starting July 11 on discovery+.

Year-round, barbecue competitions are continually launching the careers of new grilling experts and pitmasters, as well as endearing a new generation of fans to the culinary art form. In Tifton, Georgia, Symon visits the Rhythm & Ribs BBQ Festival where 60 teams compete for cash prizes. During the competition, longtime friends and rivals, The Rescue Smokers and Off The Chain BBQ, are battling for awards and bragging rights to see which team scores highest with the judges. Meanwhile, newcomers Pate’s Pit and Atomic City Smokers are ready to take on the big boys and show that they can win it all.

In another episode, Symon travels to the Lone Star state for Cedar Fest, where the teams compete in ribs, chicken and pork, but the real star is the brisket. A Missouri team, Gettin’ Basted, is ready to beat the local boys at their own game, while a pair of father-son teams, Fat Boys BBQ and Smokin’ Coles, are keeping the competition in the family. And in Memphis, Symon visits the Memphis in May International Festival to see some of the biggest names in barbecue go head-to-head in the whole hog category at the World Championship Barbecue Cooking Contest. With over 200 teams competing in the biggest BBQ competition in America, including barbecue legends Myron Mixon and Melissa Cookston defending their titles, the winner walks away with a record cash prize and ultimate bragging rights. Other episodes feature Symon visiting competitions in Alabama, Kansas and New Jersey.

“Having the chance to travel the country and watch these ‘cue stars compete on the grandest BBQ stage was a dream come true,” Symon said. “I love a good, old-fashioned culinary showdown. It doesn’t matter if it’s pork, chicken or ribs, there is nothing better than getting over the grill or smoker in the summertime to show off your skills, while interacting with the dedicated fanbase that bring these BBQ contests to life.”

“Michael Symon is no stranger to cooking competitions, having competed in the toughest contests known to a chef. And with his love for barbecue, Michael hits the road to visit some of the premier BBQ competitions in America, talking with the passionate pit and grill masters who devote their life to different styles of 'cue,” said Jane Latman, president, home and food content and streaming, Warner Bros. Discovery. “Michael is not only an award-winning and world-renowned chef admired by his peers, but also beloved by fans, which makes him the perfect guide for viewers as he tastes his way across the country.”

Head to FoodNetwork.com and Food Network’s social platforms to learn exclusive barbecue how-tos from Symon, and join him on the road as he explores America's hottest 'cue contests. Viewers can join in on the conversation all season long at #BBQUSA.