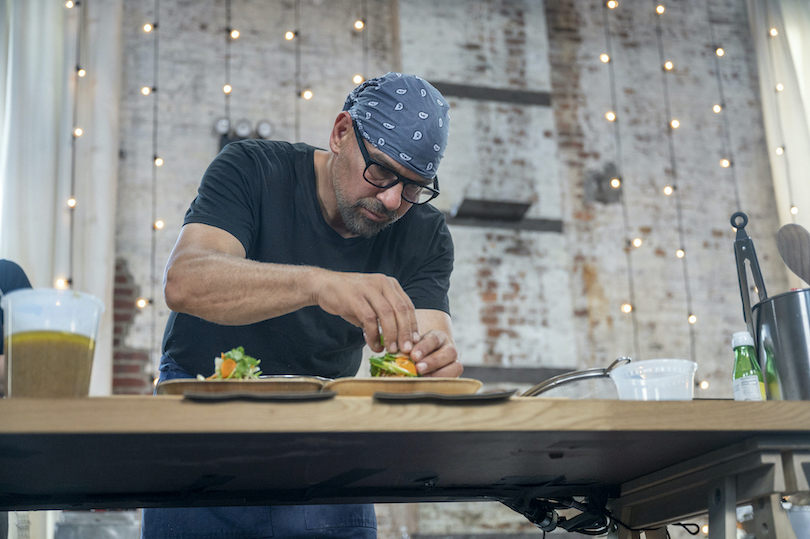 Michael Symon is an Iron Chef, award-winning restaurant owner, and a New York Times best-selling author for his cookbooks. Now, he is on a mission to go up against the best chefs in the game, and on their own turf, in the new Food Network competition series, “Throwdown with Michael Symon.”

Premiering Tuesday, Dec. 7 (9:30 p.m. ET/PT), with a special double-episode, Symon is joined by his culinary director and right-hand, Katie Pickens, as they challenge the best of the best in the culinary world, with Symon taking on that chef’s signature dish and challenging them to a good old-fashioned throwdown. The catch: he doesn’t know who he is going up against and the chefs don’t know Symon is coming.

Through four episodes, Symon will cook alongside the opposition, bringing his competitive spirit and creativity to the dishes that he is challenged to make while a crowd of spectators watch on. Each “Throwdown” has three total points at stake, with a pair of special guest judges blind tasting the dishes along with the audience in attendance, to determine the winner and see who has the ultimate bragging rights.

“As a chef, I love being creative and thinking outside the box to come up with new ways of connecting with viewers through my dishes,” Symon said. “On ‘Throwdown,’ we get to showcase some of America's greatest chefs and restaurateurs while also getting the opportunity to flex my competitive side, too. Needing to think quickly and take chances in making someone else’s signature dish, all the while not knowing who I’m competing against and battling it out in their wheelhouse, I couldn’t think of a more perfect challenge!”

A favorite chef for millions of Food Network digital fans, Symon is also throwing down on FoodNetwork.com and social all holiday season, sharing his fast fixes and signature spins in fresh recipes and talent takeovers. Head to Food Network’s social pages to watch exclusive how-to videos with Symon and get all the recipes from the show at FoodNetwork.com/ThrowdownWithMichael. Follow the conversation online at #ThrowdownWithMichael.