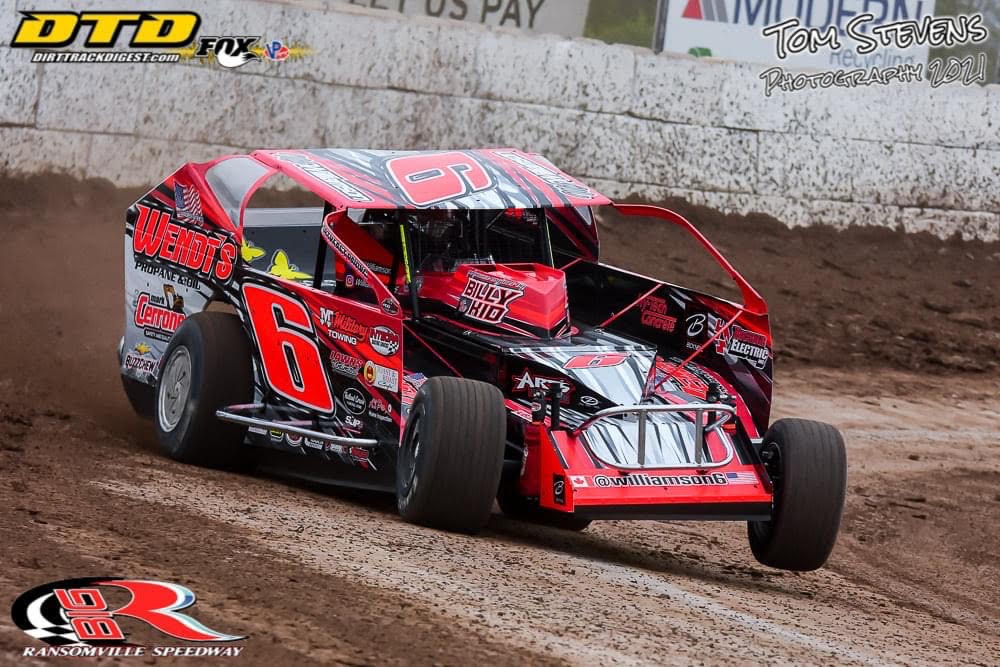 “Money” Mat Williamson from St. Catharines, Ontario, and Middleport’s Derek Wagner won the Sid and Carol Jeffery Memorial events for the Krown Undercoating Modifieds and Investor’s Service Sportsman respectively Friday night at the Ransomville Speedway. For Williamson, it was his third victory of the season at “The Big R.” For Wagner, it was his second triumph of the season.

Cameron Tuttle and Derek Wagner were on the front row for the Investors Service Sportsman feature event with Wagner taking over the lead. Wagner, Tuttle, Andrew Smith and Brett Senek would pull away from the field. Scott Kerwin clipped the front straight wall and would bring out the caution on lap three. Kerwin drove to the pits under his own power and was done for the event. Several other cars were also involved in spinning to avoid Kerwin. Wagner continued to show the way on the restart as Andrew Smith took over second after Tuttle jumped the restart. Smith and Brett Senek battled for several laps for second place, as Wagner started to pull away from the field. Cam Tuttle and Austin Susice would reel in Smith and Senek to make it a four-car battle for second place in the closing laps of the main event. Tuttle would battle with Senek for several laps for third place, with Senek being able to hold Tuttle off. Wagner pulled away from the field to pick up his second win of the season.

Pete Stefanski and Pat Dell were on the front row for the 20-lap KiPo Chevrolet Street Stocks feature with Stefanski showing the way. Jaren Israel started sixth on the grid and, at the end of lap No. 1, “Showtime” was up to fourth place. Israel would continue to head toward the front of the field as he battled and would eventually pass Mike Kramarz for third place on lap seven, as Kramarz got loose off turn No. 2. Israel would then pass Pat Dell to move into second place on lap 10. With Stefanski in the lead, Israel would close the gap and the two veterans battled for the lead. Israel would take the lead away from Stefanski on lap 12. Israel would pull away from the field to win his sixth consecutive feature and seventh of the season.

Dave Dussault and Chris Leone brought the Sunflowers of Sanborn Mini Stocks to the green flag and it was Leone in the lead. Multitime feature winner Dante Mancuso quickly took over second place and would go after Leone for the lead. Mancuso would suffer a flat right rear tire while running second to bring out the caution on lap three. He was able to rejoin the field for the race restart. Prior to the caution, Cole Susice had issues and went pitside in his No. 98. On the lap three restart, Leone would take off in the lead with Nick Tarnowski, Don Whiteside, Dussault and Ashley Harbison racing in the top five. Nevin Hazel spun in turn four to bring out the caution once again. Leone would once again pull away from the field on the restart. The car on the move throughout the event was late-arriver Curtis Rung. Rung started in 17th position and was up inside the top five by the races’ halfway point. Mike Becker spun on the front straightaway to bring out the caution with four laps remaining. Don Whiteside would battle with Tarnowski for second on the restart, as Dante Mancuso went three-wide with Harbison and Rung for fourth place. Leone would go on to score his first win of the season.

Jake Bansmer and Kenny Washburn were on the front row for the Kevin’s Carpet Cleaning Novice Sportsman feature event, and it was Bansmer showing the way. Greenley George battled with Washburn for second place, as qualifying heat race winner Jim Forster battled with Colby Adamczyk. Greenley George slapped the turn three wall to bring out the race’s first caution on lap four. George was able to continue racing. Kenny Washburn would take the lead away from Bansmer on the restart; however, Bansmer would regain the lead on lap seven. Bansmer would pull away from the field to collect his third win of the season.

During intermission, a “pass the helmet” took place to benefit Sportsman campaigner Darrell Borkenhagen, who suffered burns to his body following an incident in early July. $4,706 was collected. The winner of the 50/50 graciously donated $500 toward the cause, bringing the total to $5,206.

“The Greatest Show on Dirt,” the NOS Energy Drink World of Outlaws Sprint Cars, makes its anticipated return to Ransomville Speedway Friday, July 30, for the “Big R Outlaw Shootout.” A limited number of tickets are still available online by going to the World of Outlaws website. Pit gates open at 2 p.m., grandstands open at 5 p.m., hot laps/qualifying begins at 6 p.m., and racing will begin at 7:30 p.m.

For those who cannot attend, the entire program will be broadcasted live and exclusively on DIRTVision. Fans, drivers and crews can listen to all the racing action on 96.5-FM using their portable FM radios while on the property.