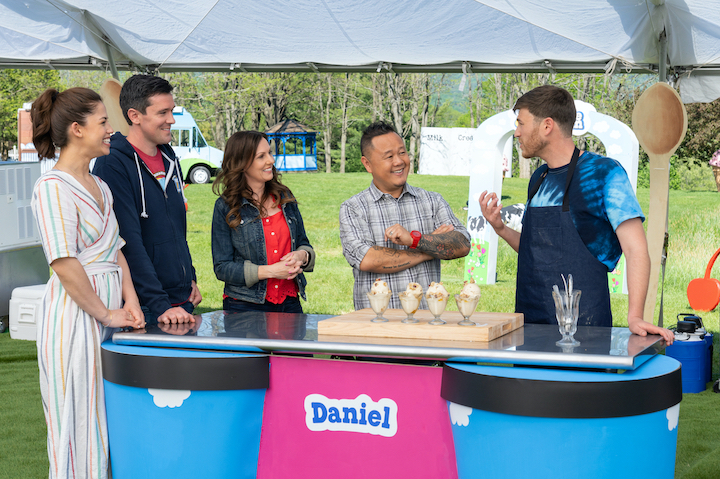 Six ice cream masters from across the country have been hand-picked for a once-in-a-lifetime opportunity: to create an original Ben & Jerry’s ice cream flavor of their own. “Ben & Jerry’s: Clash of the Cones,” a new primetime competition, premieres with a special 90-minute episode on Monday, Aug. 16 (9 p.m. ET/PT), on Food Network and discovery+.

Over four episodes, host Molly Yeh challenges the ice cream makers to capture the essence of a celebrity or pop culture icon in a new and innovative ice cream flavor, inspired by the direction given from the celebrity themselves. In each episode, the competitors use a specially constructed ice cream lab on the Ben & Jerry’s factory grounds in Waterbury, Vermont. After concocting their creations, the competitors hit the streets to have the public vote their favorite flavor, with the winner earning immunity from elimination.

“Viewers are in for an imaginative and entertaining ride, watching along as these gifted ice cream makers create original Ben & Jerry’s flavors, based on inspiration from some of the biggest stars on the planet in food, music and film. This is the perfect show for the entire family to gather around and watch this summer,” said Courtney White, president of Food Network and Cooking Channel.

Celebrity inspirations include hip-hop icon and actor Chris “Ludacris” Bridges, Food Network’s Duff Goldman and Buddy Valastro, and actor Kevin Bacon. The ice cream makers compete for a chance to impress Ben & Jerry’s co-founders Ben Cohen and Jerry Greenfield for the grand prize of $20,000 – the exact amount Ben and Jerry hoped to make in their first year of business. The winner will also have the opportunity to have their flavor sampled by fans at an event in their hometown.

Fans can view the series on Food Network and stream on discovery+ with new episodes available weekly, beginning Aug. 16.

“We’ve made a few pints over the last 40 years,” Cohen said.

“We’re excited to see what these talented competitors come up with, keeping true to the euphoric chunks and swirls Ben & Jerry’s is known for,” Greenfield added. “It’s going to be great!”

In the premiere episode, six ice cream competitors are challenged to start their journey at the end, when they must resurrect flavors from the “Ben & Jerry’s Flavor Graveyard” to use in their creations. Then, Bacon challenges the competitors to make a flavor in his name that incorporates up to six degrees of ingredients. Other episodes feature the ice cream makers creating flavors after Ludacris’ favorite desserts, along with making classic ice cream sandwich cookies from scratch. And see what happens when the competitors base their ice cream flavors on Food Network stars Buddy and Duff.

In the finale, the final three ice cream masters meet the legends, as Cohen and Greenfield reveal their final challenge.

All the competitors need to do is follow the Ben & Jerry’s way: Be creative. Have fun. Make great ice cream. May the best flavor win. See which wildly imaginative frozen treat creams the competition and takes home the cold hard cash.

Fans can check out Food Network’s Facebook, Instagram and Twitter handles to get a closer look at each week's winning flavor. Plus, Jet and Ali Tila will reimagine iconic Ben & Jerry's ice cream flavors as desserts. Join the conversation all season using #ClashOfTheCones.