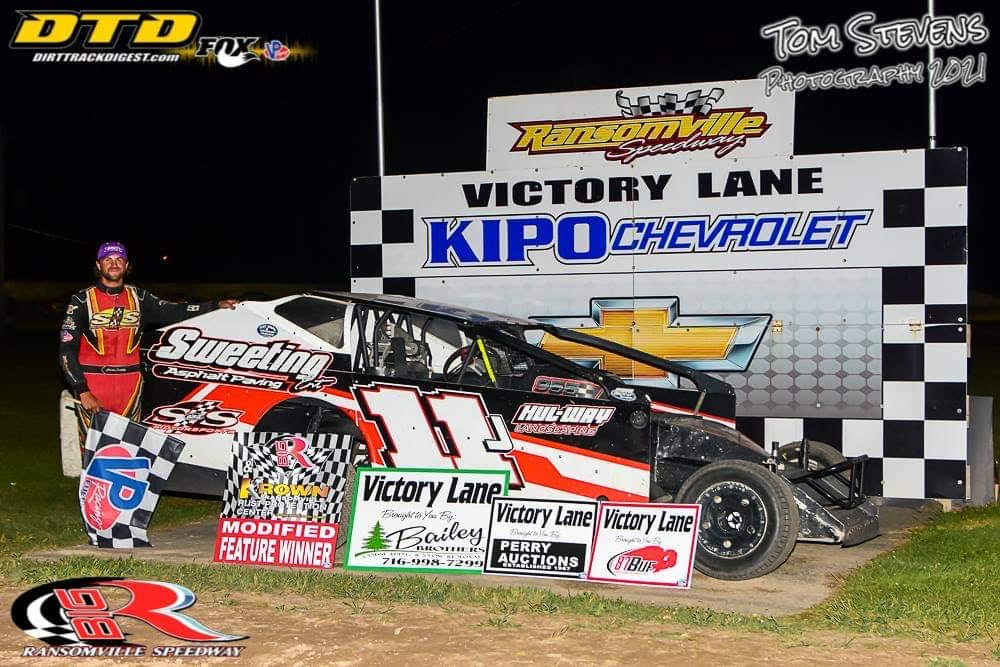 James Sweeting and Kyle Inman were on the front row for the 30-lap feature for the Krown Undercoating Modifieds with Sweeting showing the way. Ryan Susice would quickly take over third place and would set his sights on Inman. Feature winners in 2021 Mat Williamson and Erick Rudolph started deep in the top 10 and would move up into positions six and seven respectively early in the main event. Rudolph and Williamson battled for sixth and would move up after Jesse Cotriss hit the turn-four wall. Williamson would take fourth away from Rick Richner on lap 11 and Rudolph would follow suit just one lap later to take over fifth. As Sweeting pulled away from the field, Ryan Susice battle with Kyle Inman for several laps for the runner-up position. Susice would take the position away on lap 17. With Susice and Inman battling, Williamson and Rudolph began to close in on that battle. Sweeting would have complete command of the field, leading from green to checkered to pick up his first win of the season. Susice, Inman, Williamson, and Rudolph would complete the top five.

Zach George and Derek Wagner brought the Investor’s Service Sportsman to the green flag for their 25-lap feature event with Wagner taking the lead on the drop of the green flag. Brett Martin, Brett Senek and George battled for second as Wagner started to pull away from the field early. Scott Kerwin started to make his way toward the front as he entered the top five on lap six after passing Orval Harris. The leaders would hit lap traffic past the halfway mark of the event. Zach George would reel in Wagner as fourth place runner Brett Senek battled with veteran Scott Kerwin. Wagner would go on to score his first win of the season.

After a spin in turn two on the opening circuit of the KiPo Chevrolet Street Stock feature, Mike Kramarz and Pat Dell were on the front row and it was Dell showing the way. Roger Israel would go three-wide with Kramarz and Jaren Israel for second place, with Kramarz keeping the runner-up position. Jaren Israel would take second away on lap four, and then would quickly go to work on race leader Dell. Israel would take the lead away just one lap later. Pete Stefanski would enter the top five and then would battle with Kramarz and Roger Israel for third place, just as Jaren Israel and Dell would pull away from the field. The caution would come out on lap 18, as Roger Israel spun in turn four. The green-white-checkered finish would see Israel pull away from the field to claim his third victory of the season.

Ryan Plante and Chris Miller brought the field of Sunflowers of Sanborn Mini Stocks to the green for their 15-lap feature event, with Plante leading with a three-wide battle for second with Matt Hornquist, Cole Susice and Miller. Hornquist would take the lead away from Plante on lap three and Susice would take second away from Plante. As Hornquist pulled away from the field, he would have issues and would pull into the pit area with two laps remaining, handing the lead over to Cole Susice. Susice would pull away to pick up the win.

Ken Washburn and Jake Bansmer were on the front row for the Kevin’s Carpet Cleaning Novice Sportsman feature with Bansmer showing the way. Sam Junkin battled with Washburn for second place as Bansmer started to pull away from the field. Greenley George spun in turn four on lap eight to bring out the first caution of the event. Jim Forster, George and Tyler Moore got together in turn two on lap 10 to slow the field down once again, just as Bansmer and Junkin were leading the field. Bansmer would lead off the restart. Bansmer would go on to score his first Ransomville win over Junkin.

The finale of the evening was the popular demolition derby, where around 30 participants put on a show for the ages. In the end, Dylan Haniszewski was declared the winner. Austin Susice was awarded with the “Hardest Hit” of the event.

Fans, drivers and crews can listen to the racing action on 96.5-FM using their portable radios.

Next Friday, JetPort Lounge, JW Swanson, and Beyer Boys Trucking presents a full card of Krown Undercoating Modifieds, Investor’s Service Sportsman, KiPo Motors Street Stocks, Sunflowers of Sanborn Mini Stocks, and Kevin’s Carpet Cleaning Novice Sportsman. It will also be the first scheduled autograph night of the season. Pit gates will open at 5 p.m. with grandstands opening at 6 p.m. and racing beginning at 7:15 p.m. For those unable to be in attendance, the races will be streamed live on www.dirttrackdigest.tv.