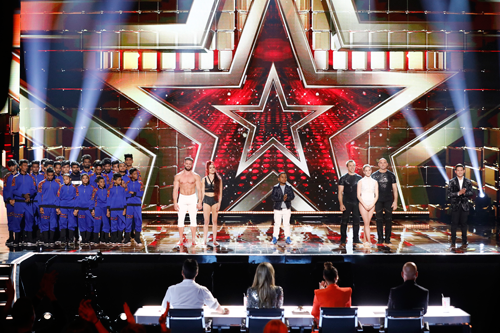 Superfans representing all 50 states voted and crowned the India-based dance group V.Unbeatable as the second season winner of “America’s Got Talent: The Champions” on Tuesday.

The group originally captivated audiences when appearing on season 14 of “America’s Got Talent.” After placing fourth, V.Unbeatable looked for a second chance at winning as one of the elite group of acts on “AGT: The Champions.”

They quickly wowed all four judges with their epic return and earned the Golden Buzzer from Howie Mandel, which sent them straight through to the finals.

Despite having more than 30 dancers in the crew, with each in-sync and high-energy acrobatic performance, V.Unbeatable lived up to their name and proved to be truly unbeatable.

“When it comes to winning talent, V.Unbeatable not only checks every box but can also jump and dance over them,” said Mandel on his Golden Buzzer act.

In the finale, V.Unbeatable performed a showstopping routine alongside legendary musician and drummer Travis Barker. Click HERE to watch the performance.

V.Unbeatable, originally named Unbeatable, was founded by Vikas and Om Prakash. After a horrible accident during a group rehearsal, in which Vikas was injured and passed away, the group renamed itself V.Unbeatable (for Vikas Unbeatable) in his honor and continued to pursue Vikas’ original dreams for the group.

“I loved V.Unbeatable from the minute I first saw them perform. They always give it everything, they perform from the heart, and they just keep getting better and better! Congratulations, you’re all incredible and I couldn’t be happier for you,” said executive producer and judge Simon Cowell.

Finishing in second place was Duo Transcend. The Utah-based trapeze artists first competed on “America’s Got Talent” during season 13 and wowed everyone with their breath-catching stunts.

Young violinist Tyler Butler-Figueroa finished in third place and was able to touch the hearts of millions of people around the world with his story and gift. He first appeared on season 14 of “America’s Got Talent.”

This season, “America’s Got Talent: The Champions” has averaged a 1.4 rating in 18-49 and 8.9 viewers overall in “live plus seven day” Nielsens, and ranked as Monday night’s most-watched entertainment show each time it aired (“live plus same day”). With digital and linear delayed viewing to date, the show’s Jan. 6 season premiere has grown to a 2.1 rating in 18-49 and 11.1 million viewers overall.

Official “AGT” program social accounts are the most engaging for any broadcast reality series this year on Facebook, Instagram and Twitter. “AGT: The Champions” has garnered over 4.9 million total interactions in 2020 so far, with Marcelito Pomoy’s first performance the most viewed video from season two with more than 80 million views across Facebook and YouTube.

The “Got Talent” format has had more than a billion global viewers since it began airing in 2006 in America and has aired in 194 territories worldwide. “Got Talent” holds the Guinness World Records title as the Most Successful Reality Television Format in history, with more than 70 local versions produced across Europe, Asia Pacific, the Middle East, Africa and the Americas.

Auditions for the upcoming season of “America’s Got Talent” are still underway. Interested acts can submit an online audition at AGTauditions.com.