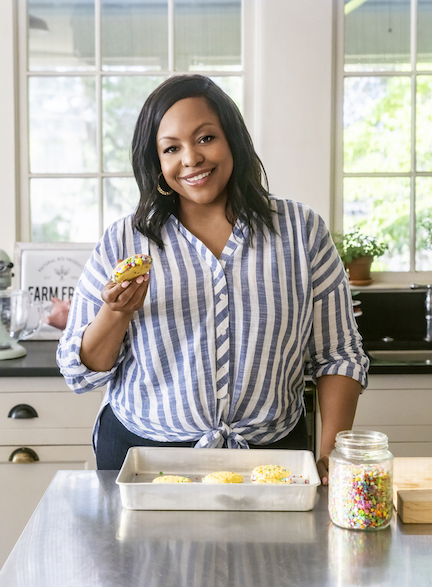 Born and raised on the Sea Islands of Charleston, South Carolina, cook and caterer Kardea Brown grew up in a big family with a love for food – especially the cherished recipes they passed down from generation to generation. She began cooking as a child in her grandmother's kitchen, where she learned to make the traditional dishes of the region. “In Delicious Miss Brown,” Kardea shares the family events, culture and recipes close to her heart – including Sunday supper after crabbing on the dock, a low country boil at the beach, and shrimp boating to prepare for the ultimate shrimp fest.

" ‘Delicious Miss Brown’ is the perfect show for summer – the recipes are just right for a sunny day grilling outdoors or a fresh seafood meal by the water," said Courtney White, president, Food Network. "Kardea's personality is as irresistible as her food, and our viewers are sure to enjoy getting to know her."

Brown is a contemporary Southern cook born in Charleston, South Carolina. She is of Gullah/Geechee descent, a term used to describe a distinct group of African Americans living in the coastal areas of South Carolina and Georgia who have managed to preserve much of their West African language, culture and cuisine. Brown created the pop-up New Gullah Supper Club, where the menu pays homage to the dishes her grandmother and mother passed down to her. She is host of Food Network's upcoming series “Cupcake Championship” and has appeared on “Beat Bobby Flay,” “Chopped Junior,” “Cooks vs. Cons,” “Family Food Showdown” and “Farmhouse Rules.”

Viewers can go behind-the-scenes with Kardea in a series of exclusive interviews and culinary challenges on Food Network's Facebook and Instagram pages, and share favorite dishes on social media using #DeliciousMissBrown. Fans can also get closer to her kitchen on the South Carolina coast and find recipes and videos at FoodNetwork.com/DeliciousMissBrown.