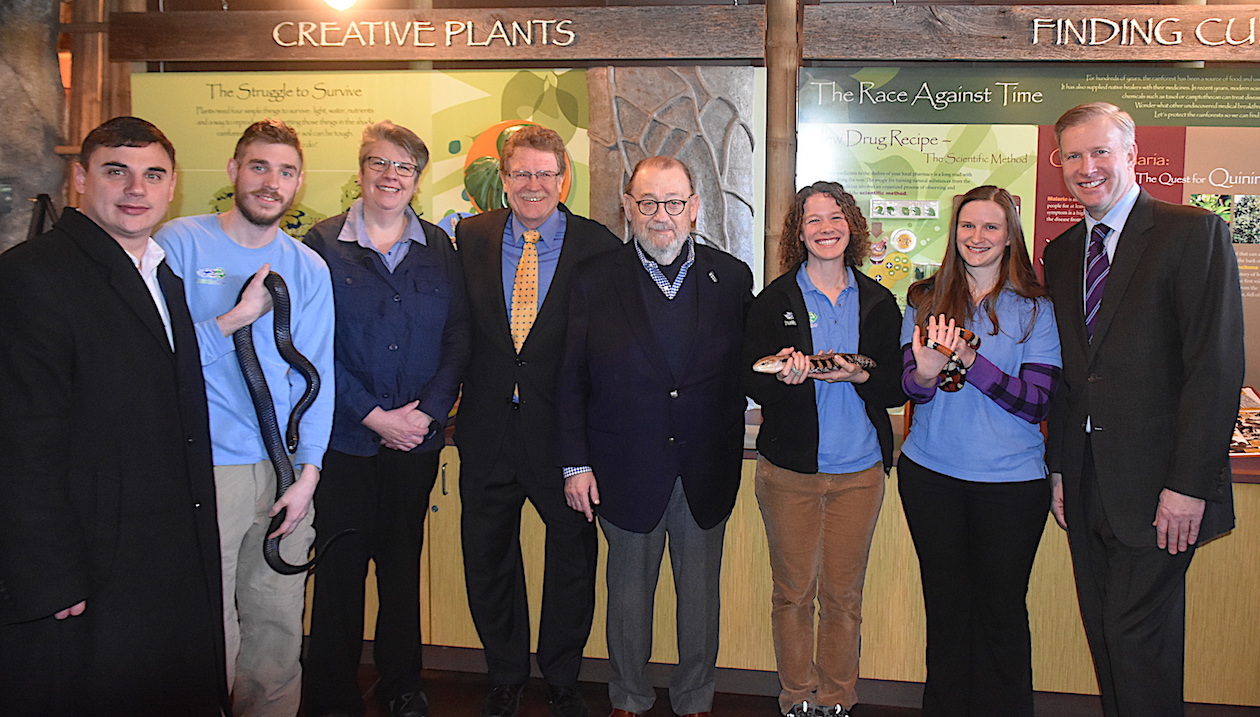 Officials gathered to celebrate news of a new exhibit.

Sat, Mar 24th 2018 09:55 am
The Buffalo Zoo, joined by New York State Sen. Chris Jacobs, announced the beginning of construction on the Donna M. Fernandes Amphibian and Reptile Center. The $3.7 million project, which started in 2015, is now ready to break ground. The attraction is officially closed until construction is complete.
"We are grateful to the state of New York and to Sen. Jacobs for securing $150,000 of state funding towards this much-needed project," Buffalo Zoo President/CEO Norah Fletchall said. "This funding, along with the generous support of others, will allow us to continue to highlight reptile and amphibian species, including those native to our region."
Jacobs said, "The Buffalo Zoo is a tremendous regional asset that I am privileged to have in my district, and I am very pleased to have secured the $150,000 needed to complete the funding for the new Amphibian and Reptile Center. This new facility will add to the zoo's reputation as a world-class destination and I look forward to its opening next year."
Originally built in 1942 by Marlin Perkins, the Buffalo Zoo's reptile house was deemed the finest in the nation when it opened. With its infrastructure and animal exhibits dating back to the 1940s, it was time for upgrades. Renovations will include a new roof, heating and ventilation systems, several new and renovated naturalistic habitats, and interactive education elements.
This update to the building is a way for the Buffalo Zoo to preserve much of the innovative exhibit design that Perkins built with the original reptile house while also recognizing the importance of and need for modernization.
The zoo will bring new species to Buffalo with the completion of the renovations. Among the new species will be the largest living lizard in the world, the Komodo dragon, and the longest venomous snake found in the Western Hemisphere, the bushmaster. These new habitats provide the highly specialized combination of temperature, lighting, humidity and structures needed for these species to thrive.
Emphasis will be placed on mixed species exhibits, such as the Ecuadorian stream and Australian stream, where many different species of reptiles, amphibians and even fish will live together.
The project will enable the zoo to continue with vital conservation efforts involving hellbenders, Puerto Rican crested toads and Panamanian golden frogs, to name a few.
With demolition slated to start in May, the Buffalo Zoo would like to thank Canisius College for helping house the current amphibian and reptile collection. Animals are also taking up residence at the zoo's veterinary hospital and education building until renovations are complete.
The project is estimated to reach completion in the late spring of 2019.
The Buffalo Zoo is located at 300 Parkside Ave.
Categories
NFP Top Around WNY Feature