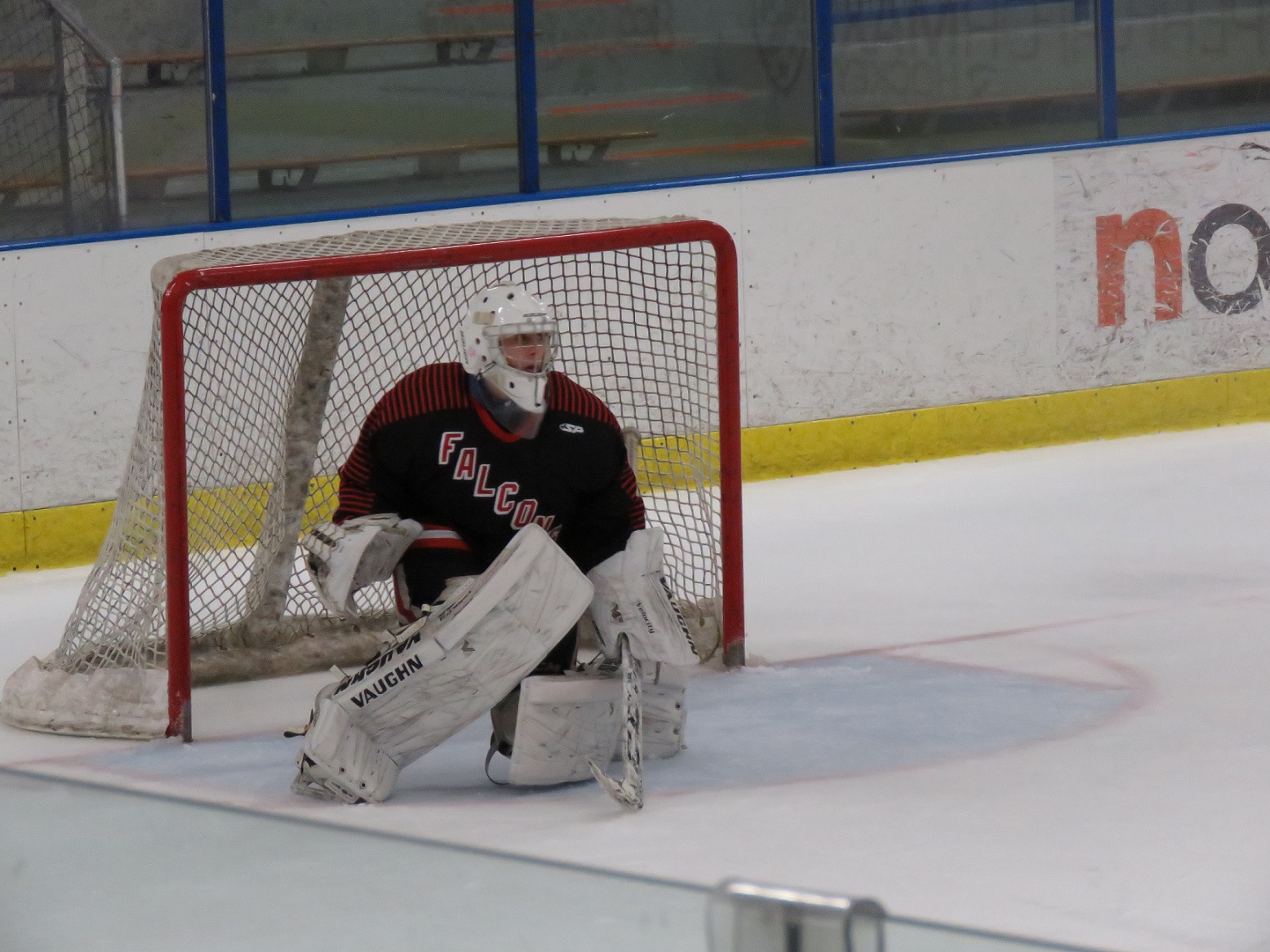 Fri, Jan 12th 2018 12:15 am
Reigning state champs Williamsville North take advantage of mistakes late
By David Yarger
Tribune Editor
In any type of sport, when you play the best, mistakes just can't happen. For 30 minutes, the Niagara-Wheatfield Falcons played mostly good, mistake-free hockey. But, it was the final 15 minutes the doomed them in the end.
The Falcons took a tough loss to the hands of the reigning New York state champs, Williamsville North, 3-2, at the Northtown Center.
Niagara-Wheatfield came out strong early, putting pressure on the No. 1 team in Division 1. The Falcons had a shot go off the goal pipe early in the first period, which the North goalkeeper had no idea where the puck was. A few minutes later, Chace Woods dished a clean pass to Nick Breier, but the duo couldn't find the back of the net.
Goalie Peyton Siegmann kept the Falcons in the game with several big saves. With 2:30 left in the first, Siegmann made two saves off loose pucks, with the last being a glove save to stop play.
With under a minute left in the first period though, Matt Bielinski got one past Siegmann, and North took a 1-0 lead into the first intermission.
The Falcons didn't put their heads down, though. With 7:22 left in the second, senior captain Chris Tobey fired a shot that got past the North goalie, and the game was tied at 1.
Less than three minutes later, on the powerplay, Tobey fired another shot from the point which went through some commotion at the front of the net and through the five-hole of the goalie, giving the Falcons a 2-1, which they held into the third period. For Tobey, the goals were his third and fourth in division games this season.
Prior to the goal, Williamsville North coaching was handed a bench minor penalty, after the coaching staff argued what they felt should've been a hooking penalty. The minor penalty gave N-W a man advantage, which Tobey capitalized on.
In the third period, North began to show why they're at the top of the standings. After a misplayed puck in the Wheatfield zone early in the third, Kevin Martin netted the game-tying goal. A little over three minutes later, the Spartans capitalized on another misplay and Bryan Aduddle put one past Siegmann, which eventually was the game-winner.
After the Spartans go ahead goal, coach Ryan Coyne, who stepped in for absent coach Rick Wrazin, called a timeout to get his team focused after letting up two quick goals.
A few minutes after the timeout, N-W had their best chance to tie it on two-on-one break. Woods was alongside Dom Pulli. The two beat the defender and Woods laid a dime pass to Pulli, who's shot was right on target, but North goalie Reily Moyer made the glove save to take away thoughts of tying the game.
Wheatfield later pulled their goalie to get a six-on-five advantage and had a couple chances, but all were pushed away by Moyer, and as the horn sounded the Spartans stayed undefeated, and on top of Division 1.
Coyne felt the Falcons came out energized in the third period but eventually got a little lazy with the puck, which ended up hurting big time.
"I felt we came out strong out of the locker room. They were pumped up and they were ready to play, but all of a sudden North got a quick goal off the defensive lapse on our side. So, emotionally I think it took a big hit to the kids. We started playing with our sticks a little too tight, kind of chipping out on pucks where we probably took ourselves out of the game that we were trying to play the whole game," Coyne said.
Coyne also said a few offensive opportunities didn't go the team's way, as loose pucks that could've been goals weren't capitalized on, and that's what made a difference.
This wasn't the first time the teams faced off this season. The first game at Niagara University in early December ended in a 2-2 tie. It was also the two team's first division game of the season. Coyne believed the differences from the first meeting compared to Thursday night's contest was that the team took less penalties, but in the end, emotions mentally got the best of the team.
Although the loss stings, Coyne said the team will take the defeat as a learning process, knowing the caliber team they had just played.
"The last nine years we've been in the league North-Wheatfield games have constantly gone back and forth, they're very intense games; it's really anyone's game and who's gonna work the hardest and who's gonna outwork the other team really is what it comes down to. I think were very competitive ...were very similar teams and really. ...They're a great team and you can never ever overlook them. They're always going to come with heart and that's why its been such a good rivalry the last 10 years," Coyne said.
The loss drops the Falcons record to 8-2-1-1. Also for the Falcons, Siegmann finished with 31 saves, while Nick Peters has two assists.
The Falcons next game is at 6 p.m., Saturday at Dwyer Arena versus Bishop-Timon. 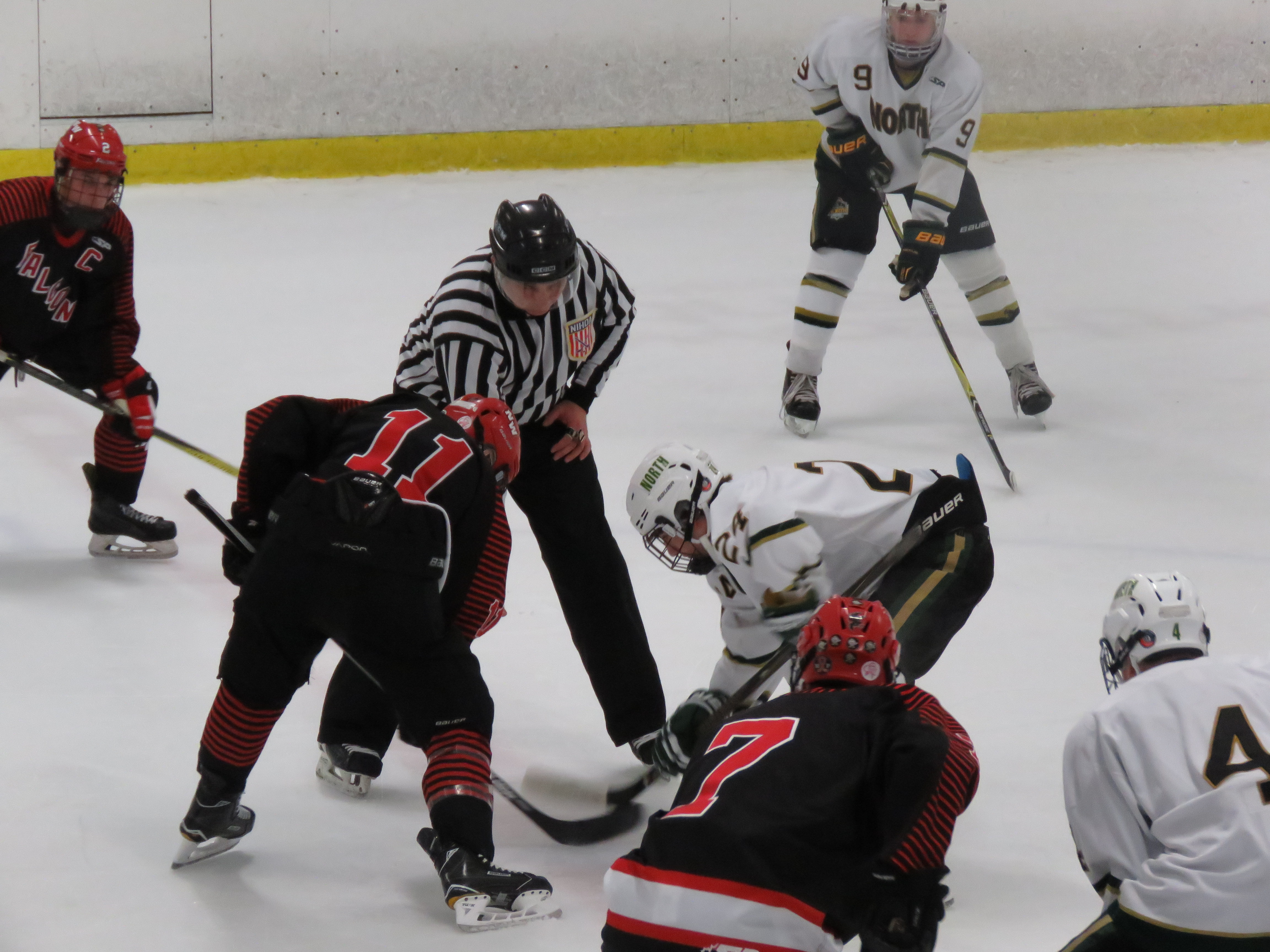