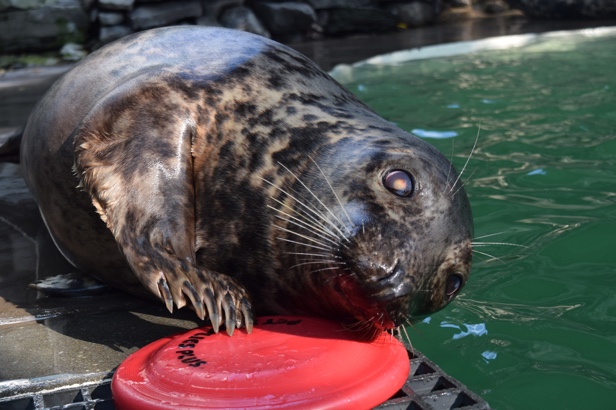 Sat, Dec 9th 2017 09:40 am
Medusa, the Aquarium of Niagara's 2-year-old gray seal, has received successful cataract removal surgery.
Dr. Carmen Colitz, a world-renowned veterinarian ophthalmologist, performed the surgery at the aquarium on Thursday morning. Colitz hails from Jupiter, Florida, and has performed more than 300 cataract removal surgeries on seals and sea lions. Medusa is the second gray seal Colitz has performed this procedure on, as there are few gray seals under human care.
During the procedure, it was discovered Medusa's retinas were almost fully degenerated, so the possibility of her regaining sight has, unfortunately, been eliminated. This surgery addressed the high risk of ulceration, lens luxation and glaucoma - which was the primary intent of the procedure.
Aquarium staff said that, although Medusa's vision will never be restored, this surgery would allow her to live more comfortably.
"We will always make animal welfare our top priority," Executive Director Gary Siddall said. "The aquarium has a dedicated team of animal care professionals, and we selected the best by bringing in Dr. Colitz to perform this surgery."
In March 2016, Medusa, then 3 months old, was rescued - completely blind - off the coast of Long Island.
The Aquarium of Niagara is a premier facility for blind and visual impaired seals and sea lions.
Medusa lives with Della, a 27-year-old gray seal completely blind from cataracts; and Sandy, a 37-year-old harbor seal who developed cataracts in the 1980s.
In 1987, Sandy made history by being the first seal ever to receive successful cataract removal surgery.
Categories
NFP Top Around WNY Feature Tribune HP Feature Picture