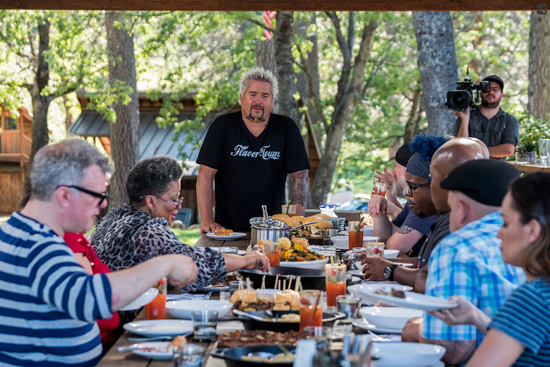 Guy Fieri looks over the work created by contestants on "Guy's Big Project."

Mon, Oct 2nd 2017 02:00 pm
New series premieres Sunday, Nov. 5
Guy Fieri has visited thousands of restaurants on "Diners, Drive-Ins and Dives," literally putting food-road shows on the map. Now, Guy is searching for Food Network's next big culinary-travel series.
After receiving and sorting through thousands of submissions from hopeful hosts with promising concepts, Guy and his team of food and television experts narrowed it down to a final group of prospects who will vie to have their idea developed into a show on "Guy's Big Project." The six-episode journey begins Sunday, Nov. 5 (9 p.m. ET/PT), and documents every twist and turn as the prospects move from initial pitch through development to network review, to the ultimate end goal: The premiere of a new show on Food Network.
"Over a decade ago, I was given a chance that I could never have dreamed of on 'Food Network Star,' and now I'm honored to have the opportunity to help make someone else's dream a reality," Guy said. "As a producer, I know what it takes to get a show off the ground, and we will see if these prospects have the passion and skills needed, because a great idea is just the first step."
" 'Guy's Big Project' invites viewers behind-the-scenes to see how a series goes from a passionate idea to a reality on-air," said Courtney White, senior vice president programming, Scripps Networks Interactive. "Guy's betting on not only identifying the next big idea for the network, but he's also committed to doing everything needed to help the prospects succeed."
Guy and his team of experts, including Food Network's Alex Guarnaschelli and veteran television producer Mark Dissin, are taking the most promising prospects out on the road to see who has what it takes to be a success. The journey begins with the finalists picking a restaurant that best represents them and their show idea, where they film a pitch video to convey what their show would be about. Then, the pressure heats up as they whip up a meal in Guy's personal kitchen that embodies their idea. One prospect will find the feedback hard to chew and will be sent home.
As the season progresses, the prospects are put through the paces by Guy and his team, learning there is a lot more to hosting a food-television show than a passion for food and cooking skills. From describing each bite of food in order to convey the flavors, aromas and textures, to engaging the audience while eating and interviewing a wide variety of chefs, there is a lot to digest - especially when your hopes and dreams are on the line.
On the finale on Sunday, Dec. 10 (9 p.m. ET/PT), the remaining prospects each shoot a pilot employing all the skills they learned from the previous weeks. After submitting their tapes to the network, they must wait to hear the decision. Immediately following the finale, at 10 p.m., viewers will find out who made the cut as they get a sneak peek of the winner's series!
The prospects include: Mark Anderson (Boise, Idaho) together with Ryan Fey (Los Angeles), Zane Caplansky (Toronto), Sharon Damante (Napa, California) together with Sherri Williams (Crestview, Florida), Christian Gill (Cincinnati), Lindsay Greene (Atlanta), Rashad Jones (Ocala, Florida), Dariany Santana (Kenilworth, New Jersey), and Vincenzo Vaccaro (Astoria).
Fans can get an insider's look at the making of "Guy's Big Project" with behind-the-scenes photos of Guy and the prospects, as well as bonus videos and recipes inspired by the show at FoodNetwork.com/GuysBigProject. To join the conversation on social media, use #GuysBigProject.
Categories
Entertainment Entertainment feature Food