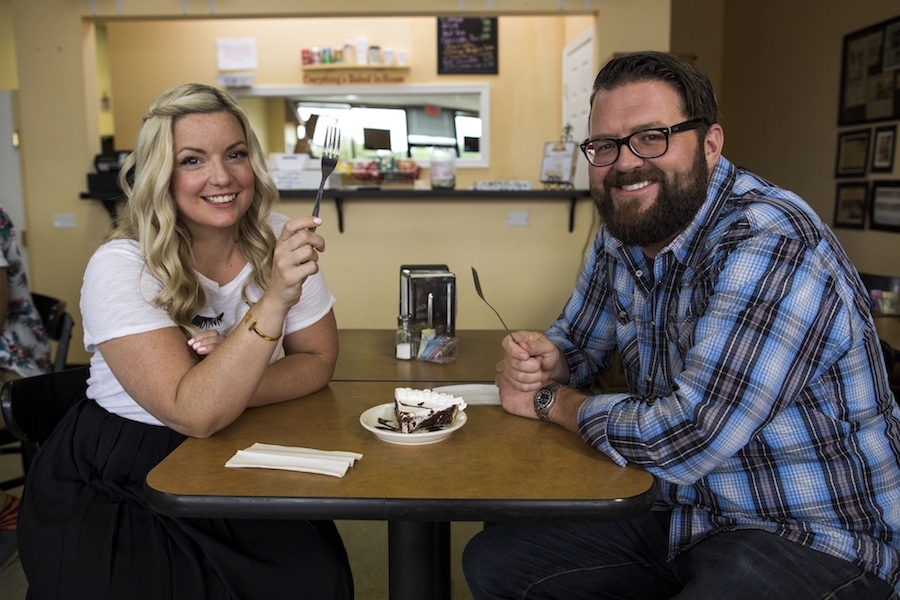 Mon, Sep 18th 2017 05:30 pm
Food expert Damaris Phillips and NASCAR personality Rutledge Wood are obsessed with everything southern, especially the food and the people behind it. They will take viewers on a mouthwatering road trip through the region to visit the down-home food spots they love in the new series "Southern and Hungry."
From legendary whole hog barbecue in Charleston, South Carolina, and delectable shrimp and grits in Savannah, Georgia, to southern staples fused with Asian flavors in Damaris' hometown of Louisville, the two friends explore the most memorable dishes and restaurants that bring them back to their childhood.
"Southern and Hungry" premieres Monday, Oct. 9 (10 p.m. ET), on Cooking Channel.
"Damaris and Rutledge eat, sleep and breathe the south - the people, the culture and, most of all, the food," said Courtney White, senior vice president, programming, Scripps Networks Interactive. " 'Southern and Hungry' is a delicious celebration of the places and dishes that remind them of home."
In the first episode, Damaris and Rutledge sop up the sauce in Charleston, as they discover the pleasures of whole hog barbecue with legendary pit master Rodney Scott. Then they are on to one of the best burgers in America, where the meats are butchered in-house at the Neon Pig in Oxford, Mississippi. Finally, it's a feel-good lesson in down-home cooking with fall-off-the-bone oxtail at Addielee's Restaurant in Moncks Corner, South Carolina. Upcoming episodes visit Savannah, Georgia, plus Memphis and Louisville.
Southern spitfire Phillips won season nine of "Food Network Star," leading her own daytime series, "Southern at Heart," as well as "The Bobby and Damaris Show," which she currently hosts with Bobby Flay, and many other appearances on Food Network.
She graduated from Jefferson Community and Technical College with a degree in culinary arts and then taught at the same school inspiring up-and-coming chefs to follow their dreams. One of five kids, Damaris learned to cook at an early age and was responsible for cooking one night a week for her large family. Damaris' modern twist on Southern classics and her signature wit pack a one-two punch in the kitchen.
Her first cookbook, "Southern Girl Meets Vegetarian Boy," will be published in October.
Wood has been around food and cars all his life. From buying restoring and selling cars with his dad as a kid to sampling the latest creations at his parent's barbecue restaurant, Rut's roots run deep. After moving from Birmingham, Alabama, to Peachtree City, Georgia, and completing high school, Rutledge went on to graduate from the University of Georgia. He has hosted or co-hosted various NASCAR shows and events for Fox Sports, including "SPEED Road Tour Challenge," "NASCAR Smarts" and "NASCAR Live," as well as the annual NASCAR awards banquet.
Rutledge has also starred on History Channel's "Top Gear USA" and "Lost in Transmission." In 2015, Rutledge joined NBC Sports, where he covers the biggest sporting events in the world from the 2017 Olympic Games in Rio and the Kentucky Derby to the upcoming Winter OIympics in South Korea.
Viewers can find top-rated Southern recipes and learn more about "Southern and Hungry" at CookingChannelTV.com/SouthernandHungry.
Categories
Entertainment Food OYT