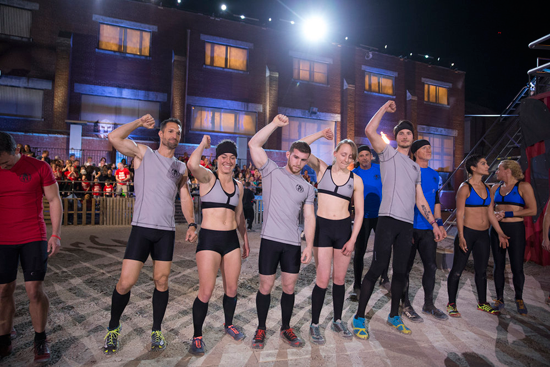 Fri, Jul 21st 2017 04:35 pm
The Mathletes will compete in the season finale on Sunday night for $250,000
The Mathletes are closing in on $250,000.
The team of University at Buffalo math students competing on NBC's second season of "Spartan: Ultimate Team Challenge" edged out the competition by 6 seconds in the second round of the series, earning a trip to the final night of competition.
The students competed against 24 teams from around the nation for the opportunity to win a quarter of a million dollars. Now, the Mathletes are among six teams left standing.
The two-hour season finale of "Spartan: Ultimate Team Challenge" will air at 9 p.m.  Sunday.
The Mathletes consist of Chris Komin, a senior majoring in math and film study; Zoe Herrick, a junior majoring in math and biomedical engineering; Trevor Bernard, a sophomore math major; and Ellen Lutnick, a junior who switched her major from math to exercise science.
The team is led by Kyle "Wooch" Graff, an elite "Spartan" athlete who has earned a reputation for racing in thongs - a tradition that was kept alive on Monday night when each of the Mathletes donned blue thongs adorned with white stars.
The youngest team in the competition with an average age of 20, the Mathletes took their competition by surprise, easily winning in the first round despite being billed as the underdogs.
"They look unassuming. They don't look like a typical Spartan," Graff said. "But the Mathletes proved in round one that they're just as much brawn as they are brains."
Known for their analytical approach to the obstacle courses inspired by Spartan Race, the students view their education in advanced math at UB as an advantage.
"We're problem-solvers and go about obstacles in terms of efficiency rather than strength. We're able to formulate and calculate quickly the best way to tackle Spartan obstacles," Komin says.
Their quick thinking in a race that was decided in less than 10 seconds helped them advance to the final night of the competition.
The Mathletes competed against the Ninjas and Saddle Up in a punishing, mile-long course that consisted of using a 450-pound tire to swing across a pool, piecing together 250-pound puzzle pieces to support and climb a 16-foot pole, crawling through a mud pit under barbed wire, and building a human ladder to ascend a slippery, tilted wall.
The students overcame a slow start and injury to Lutnick - who dislocated her shoulder while climbing the Slip Wall - to place second in their heat with a time that was fast enough to earn them a slot in the finale.
Lutnick, who balances her fierce competitiveness with a fondness for poetry, won't allow the injury to slow her down. She delivered this prose to her competition: "They're compelled to sprint marathons at the break-neck of dawn. We are your friends, your neighbors, your family; but at night, we slip back into warrior dreams.
"We rattle our shields and sharpen our spears in protest of a simpler time of discipline and loyalty. Listen for the battle cries in the distance. We are Spartans. And we're coming for you."