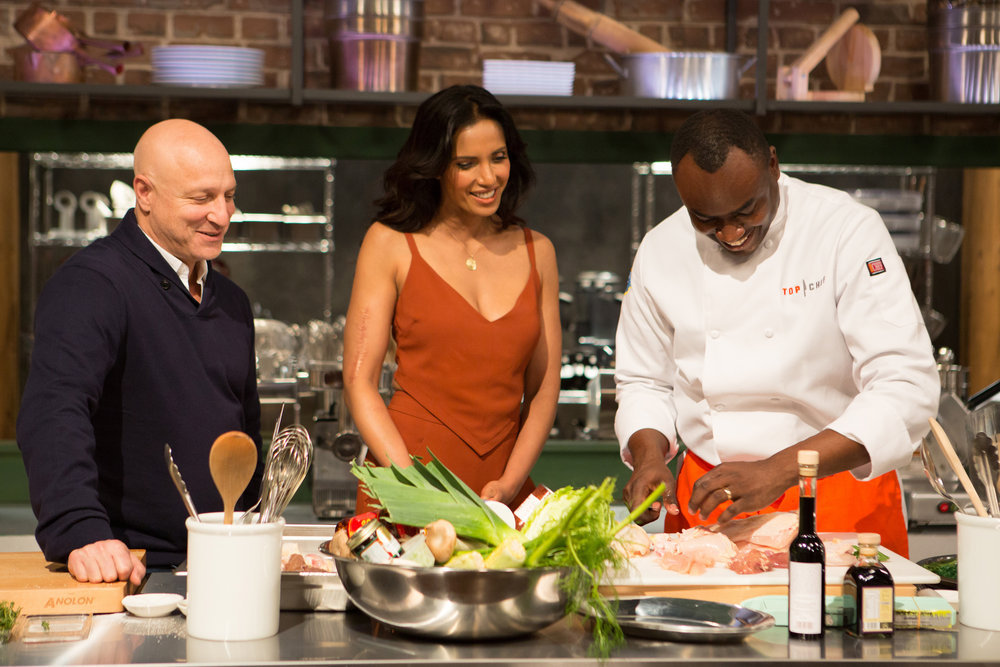 'Top Chef' heads to Charleston for battle of old versus new

Bravo Media's Emmy and James Beard award-winning "Top Chef" takes on the culinary hotspot of Charleston, South Carolina, for the new season, kicking off with a supersized premiere on Thursday, Dec. 1 (10-11:15pm ET/PT). In an unparalleled twist, eight acclaimed chefs from across the country will unpack their knives alongside eight chefs from seasons past, who have never won the prestigious title and are back for redemption.

Sitting at the judges table for season 14 are host Padma Lakshmi, head judge Tom Colicchio, and Gail Simmons. They will be joined by new judge and "Top Chef Masters" alum Graham Elliot.

Meet the chefs entering the "Top Chef" kitchen for the first time.

For more information on the cheftestants, visit www.Bravotv.com/top-chef.

From fan favorites to finalists who have been close enough to taste it, Bravo will be serving up clues on "Top Chef's" Facebook and Instagram over the next week on the identities of the returning cheftestants. Fans and foodies alike can join in the #TopChef social conversation to get exclusive hints about who will be returning to the kitchen.

This season is the ultimate challenge of old blood versus new when 16 talented chefs descend upon the city of Charleston to battle it out for $125,000 furnished by S.Pellegrino Sparkling Natural Mineral Water, a feature in Food & Wine magazine, a showcase at the annual Food & Wine Classic in Aspen and the coveted title of "Top Chef."

Along with the return of the daunting sudden-death "Quickfire," high-stakes challenges include cooking for barbecue king Rodney Scott, to the tunes of country music artist Darius Rucker, a tribute honoring Edna Lewis and a holiday-themed "Feast of Seven Fishes" dinner.

Always upping the ante, one landmark challenge calls for the contestants to cook for a room full of culinary greats in hopes of landing the highly lauded prize of serving a winning dish at the coveted James Beard House in New York City. From a shrimp and grits cook off to a biscuit blowout, the chefs dive deep into the roots of low-country cuisine to prove to the judges, the world and themselves that they have what it takes to conquer their competition.

Toward the end of the season, the cheftestants will also have the opportunity to vie for the "Top Chef Fan Favorite" title, voted upon by viewers on www.BravoTV.com. The winner will be announced on the finale night on "Watch What Happens Live," and will receive $10,000 furnished by S.Pellegrino Sparkling Natural Mineral Water.

For a sneak peek, visit: http://www.bravotv.com/top-chef/season-14/videos/introducing-top-chef-season-14s-rookie-chefs.