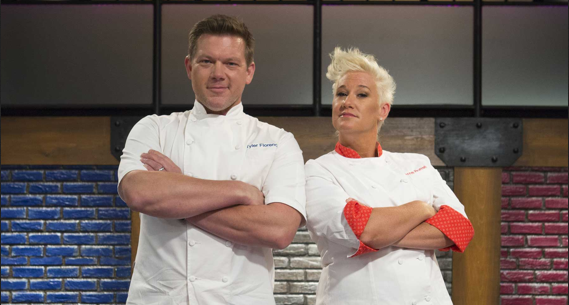 In the seven-episode series, Anne and Tyler each lead a team of kitchen-challenged recruits in a grueling culinary boot camp designed to turn them into skilled cooks. A $25,000 grand prize is awarded to the contestant who makes the most impressive culinary transformation, in addition to delivering victory and bragging rights for the team leader.

"Welcoming a new roster of worst cooks is an annual tradition, and our viewers love watching their comical kitchen mishaps evolve into serious cooking chops," said Bob Tuschman, Food Network general manager and senior vice president. "Anne and Tyler are both fiercely competitive and determined to whip their contenders into tip-top culinary shape, and the transformations are remarkable."

In the season premiere, an open call brings some truly horrible cooks to the table to meet Anne and Tyler. Fourteen new recruits are selected for boot camp and each presents their signature dish, then contestants are divided into "Team Anne" and "Team Tyler."

In lesson one, recruits must make the ultimate romantic meal. Anne's red team tackles roasted chicken with Israeli couscous and pomegranate sauce, while Tyler's blue team makes chateaubriand with mashed potatoes and roasted mushrooms. The least successful competitors from each team are sent home, while the remaining 12 move on to the next challenge.

Viewers wanting more can visit FoodNetwork.com/WorstCooks for behind-the-scenes photos, interviews, easy cooking tips and more insider coverage. Fans also can connect with each other on Facebook at Facebook.com/FoodNetwork and on Twitter with the hashtag #WorstCooks.