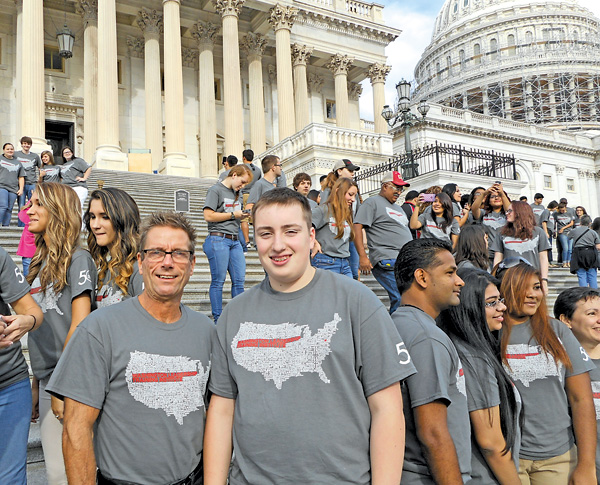 Niagara-Wheatfield senior Ray Delucci was named the New York State SkillsUSA Secretary last year thanks to his education at the Niagara Career and Technical Education Center. Delucci is in his second year of his Culinary Arts Program, and is the first SkillsUSA state officer from the center.

Since taking over the title, it has been a whirlwind of traveling and leadership training. Over the summer he attended his first conference at the National SkillsUSA competition in Kansas City, Missouri.

"It was the first time I traveled on an airplane, so it was very exciting," he said. "I met people from all over the country and I got to develop relationships with the other New York state officers as we went through a week of training that was fun and motivational. The experiences I faced there made me a better leader and person."

He attended additional training in Binghamton.

Recently, Delucci and his culinary arts teacher Robert Ihle were invited to Washington, D.C. to the Washington Leadership Training Institute, where Delucci interacted with people from all around the country.

"Our main purpose was to advocate for the Carl Perkins Vocational and Technical Education Act," he said. "We met with our Congress representatives and spent a day at the Capitol. It was an incredible experience to see how the process of government works, and also see the Smithsonian, the Pentagon and Arlington Cemetery."

Delucci said his involvement in SkillsUSA has been an awesome experience and made him an advocate for the organization.

"I am gearing up for our fall New York state leadership meeting," he said. "I am hoping to engage many skills members to become more involved and be better leaders in their home chapters and their communities."