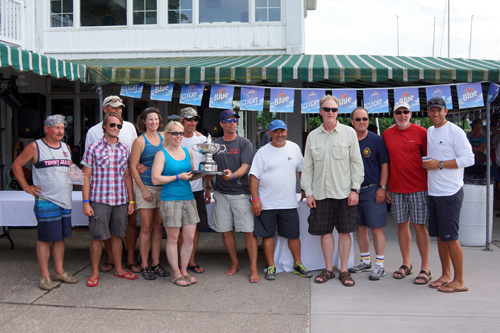 On July 26-27, the Youngstown Yacht Club hosted the first-ever CanAm Challenge, a one-design and pursuit class event that emphasizes a friendly rivalry between the U.S. and Canada, with each country vying for bragging rights. A total of 92 boats registered for this inaugural event; split between 12 one-design divisions as well as two pursuit classes, spinnaker and non-spinnaker. That weekend, boats descended upon Youngstown from as far away as San Diego in the U.S. and Ottawa, Ontario, in Canada.

While the regatta was sailed in winds on the lighter side, its participants did an exceptional job with most courses sailing six good races with great competition. Competitors from both the U.S. and Canada had impressive results in the various classes, which included: 8 meters, J70, J88, J24, J22, Beneteau 36.7, Shark, Laser 28,Tripp 26, C&C 29, Melges 24, Kirby 25 as well as spinnaker and non-spinnaker pursuit classes.

To determine the winner of the CanAm Challenge, the racing was so close that there was only a one-point spread between the U.S. and Canada to determine the winning country. In the end, the 2014 CanAm perpetual trophy winner went to Team Canada. The CanAm Challenge also served as the first-ever J88 Great Lakes Championships, with five competitors and Seaweed/Skipper Jim Egloff winning the honor.

Shown above are the winning Canadian skippers with the CanAm trophy.

YYC officials report the week leading up to the actual racing was highlighted with clinics and a "Junior CanAm Challenge" sailed in Lasers, 420s and Optis. Quantum Sail Design group had representatives hold J70 and J88 clinics focusing on rig tuning, on-the-water practice starts and debriefs. The Junior CanAm ran on Tuesday and Wednesday of that week, with crews representing yacht clubs from western and central New York as well as southern Ontario. Racing for this junior regatta was light and shifty on the first day, and windy and wavy on the second day. All said, a great test of the young sailors' skills.

The Can Am Challenge was an all-inclusive event that helped build camaraderie amongst the crews, as well as helped to keep costs down for the sailors.

While this event is new to the YYC, hosting great regattas is not, and many of the friendships that began at past events like the Level Regatta were rekindled, as well as many new traditions. In addition to the Thursday night Street Dance in the village followed by great music at the YYC on Friday, Saturday and Sunday, the event also hosted a street hockey tournament in a show of friendly rivalry between the U.S. and Canada. Multiple teams competed for their country but in the end, just like on the water, Canada came out on top.

The Challenge is sure to become a tradition that participants and spectators will not want to miss.

The Youngstown Yacht Club would like to thank its sponsors that made this event such a great success including Towne Auto, First Niagara, Mount Gay Rum, Double Cross Vodka, Haarstick Sailmakers, Quantum Sails, Ullman Sails, RCR Yachts, Brown & Brown Insurance, Sail 22, APS, Alpha Ropes and RBS Battens. In addition, the YYC is grateful to the volunteers who pitched in to make this first-time event one to remember.

For those who couldn't make it to this year's CanAm Challenge, the YYC hopes to see you at next year's event.