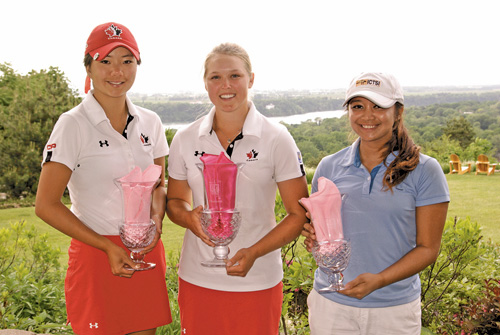 The Niagara Falls Country Club hosted the second Women's Porter Cup tournament June 11-13. Following the deep tradition established by the 55 years of the men's Porter Cup, it was decided the world of female golfers deserved "A Cup of Their Own."

This year, the field of golfers grew from an inaugural 39 players in 2013 to 66. More importantly, the caliber and tournament experience of the women who accepted invitations was enhanced considerably. This led to high expectations on the part of NFCC organizers, as there were eight players in the top 100 world-ranked amateurs who accepted an invitation to play. The group included the entire Canadian National Women's team, led by 16-year-old Brooke Henderson, the third-ranked female amateur in the world.

Contestants representing 10 states, Canada, Sweden, Finland, Malaysia, New Zealand, the Philippines and dozens of Division I and II colleges provided a spectacular display of shot-making that had spectators wondering just how good the scores could be. With 30 rounds at par or better, that question was soon answered. However, it was the final day that provided the fireworks that had the area's media networks and spectators scrambling.

Trailing the leaders by nine strokes entering the final round, Henderson decided her best golf had not yet been realized. The ensuing round produced a discussion for the ages. With 11 pars, five birdies and two eagles, the resulting 62 left the gallery gasping - considering it came within one stroke of the Bill Haas' NFCC course record (10 under), shot in the 2003 Men's Porter Cup.

This score made Henderson the 2014 women's champion. She will compete this week as an amateur in the U.S. Women's Open at Pinehurst.

There was a tie for second place between Princess Superal of the Philippines, and Canadian Jennifer Ha, who finished just three strokes back. Maren Cipolla of Lewiston finished tied for 24th.

"The event's sponsorship lead came from ECMC, who helped support this year's theme of health and wellness for women," said tournament director Brian Oakley. "Contributions from local business, NFCC members and Niagara Falls Redevelopment provided the ability to make a well-deserved contribution to the YMCA's Carolyn's House, on behalf of the Women's Porter Cup."