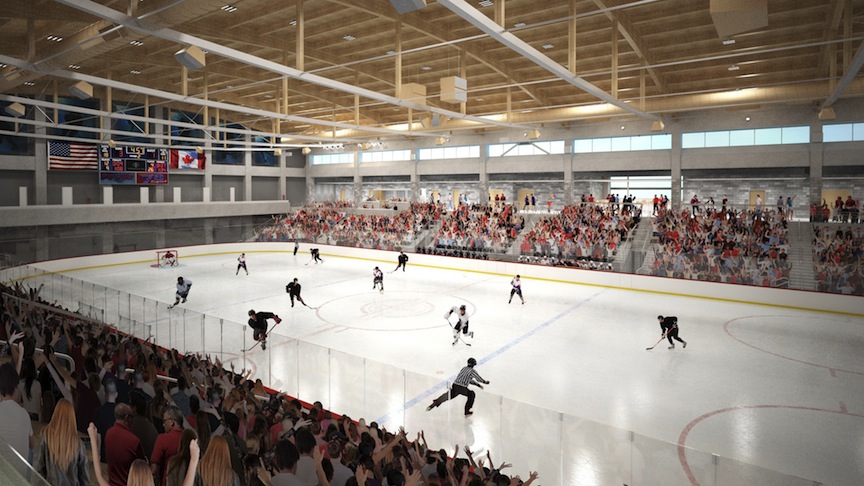 USA Hockey announced today it would bring two major world championships to Buffalo in 2015, with both being staged at the soon-to-be-completed HARBORCENTER.

From Jan. 4-12, 2015, the eighth annual International Ice Hockey Federation Under-18 Women's World Championship will take center stage in Buffalo with the top eight nations in the world competing to win the gold medal.

Then, from April 24-May 2, the International Paralympic Committee Ice Sledge Hockey World Championship will be contested with eight nations vying for the coveted gold medal.

"We're extremely pleased to bring these two world championships to HARBORCENTER," said Dave Ogrean, executive director of USA Hockey. "The athletes and fans will be treated to a state-of-the-art facility in an area where hockey is an everyday passion. Between the HARBORCENTER and Sabres staff, the local community and our terrific New York affiliate, we have an infrastructure in place that will ensure an outstanding experience for everyone involved."

"To have the opportunity to host two world championships in the span of four months is terrific not only for HARBORCENTER, but also our community," said John Koelmel, president of HARBORCENTER. "We're proud of the confidence USA Hockey has in us, and we look forward to welcoming athletes and fans from across the world."

"A strong relationship with USA Hockey is important to us," said Ted Black, president of the Buffalo Sabres. "And we're excited to bring these two world-class events to Buffalo and HARBORCENTER. We'll work hard to have visitors leaving these events excited to come back."

HARBORCENTER, which is slated to open in downtown Buffalo in early October, includes two ice sheets, each 200-bu-85, as well as 11 locker rooms. The main arena has seating for 1,800, while the second rink has a capacity of 500.

The IIHF Under-18 Women's World Championship will feature teams from the U.S., Canada, Czech Republic and Russia in Group A and Finland, Sweden, Japan and Switzerland in Group B. Team USA, which has played in the gold-medal game in each of the first seven editions of the event, has captured the event's top prize three times (2008, 2009, 2011).

"It's exciting to bring the Under-18 Women's World Championship to HARBORCENTER," said Reagan Carey, director of women's hockey for USA Hockey and general manager for the 2015 U.S. Women's National Under-18 Team. "Fans will have a unique opportunity to see the best athletes in the world compete for a gold medal."

The IIHF Under-18 Women's World Championship has been conducted in the U.S. on just one other occasion, that in 2010 in Woodridge, Illinois, at Seven Bridges Ice Arena.

The U.S., which has captured the world championship gold medal on two occasions (2009, 2012), has hosted the event twice previously. In 2000, the U.S. finished sixth in Salt Lake City, Utah, while in 2008 Team USA captured the bronze medal in Marlborough, Massachusetts.

"Buffalo has such a rich history in sled hockey and it will be terrific to have the world championship in the brand-new HARBORCENTER," said Dan Brennan, general manager of the 2015 U.S. National Sled Hockey Team. "Fans will see amazing athletes in an extremely competitive environment."

Full details surrounding both world championships, including schedules and ticket information, will be released at a later date.

Two members of the gold medal-winning 2014 U.S. Paralympic sled hockey team are from the Buffalo area, including Lancaster native and two-time Paralympian Adam Page, as well as Buffalo's Paul Schaus.

The U.S. became the first nation to capture back-to-back gold medals in sled hockey at the Paralympic Winter Games when it beat host Russia in the 2014 Paralympic title game. NBC televised the contest live to mark the first-ever live broadcast of a Paralympic sled hockey gold medal game in the U.S.

History of the IIHF Under-18 Women's World Championship