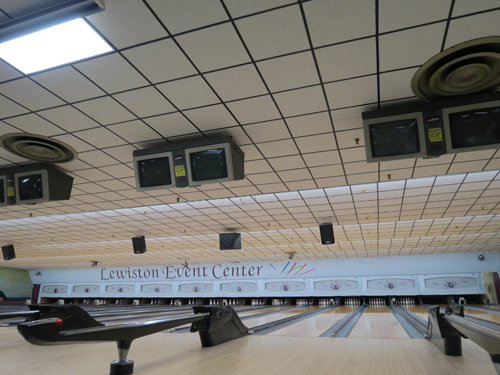 This is the good side, complete with new ceiling tiles, paint, lighting and lane work. The next photo shows the "other side."

The Lewiston Event Center (formerly Frontier Lanes) is a perfect example of before and after construction work.

Walk into the building and you'll notice the right side is bright and vibrant, with new paint and ceiling tiles, and good-looking bowling lanes.

The left side, well, the left side is dark, fairly uninviting and in need of the right side's fixes.

Fortunately, that left side will be renovated this summer. In addition to improved bowling conditions, this portion of the building will have a new video arcade and conference/meeting spaces.

Phase two will just about complete the work owners Emery Simon and Harold Hibbard have put into the building they purchased in 2012.

"When they first took it over, it was a 40-lane bowling alley, which, now it's 36 - four lanes have come out, with two more to come out this summer," LEC manager Kim Cudmore said. "We're building a separate arcade room, a separate banquet room. What they've done is, the one side, they've completely resurfaced the lanes, changed out all the ceiling tiles and have put new LED lighting throughout the building."

They also painted the outside of the building, cleaned up a large portion of brush and debris, repaired the roof and reconfigured the bar area so that it's more open.

That was just the beginning.

"Phase two, this summer, will have a whole new scoring system put in, with flat-screen television monitors put in for the scoring," Cudmore said. "The kitchen is going to be extended, with a more extensive menu coming out."

The arcade is going in because, "What we're looking to do is just find a safe place for that (younger) age group to go, so the kids are off the streets, but they can come in here and play," Cudmore said.

The banquet area will be designed for parties, meetings and conferences. It's expected to hold between 100 and 150 people.

Annual meetings, for example, could take place in a private area, and include post-meeting bowling and refreshments.

"A lot of the retreats, they're looking for team-building activities and exercises and experiences," said Christina Crane, manager of new business development for Simon Construction Co. "Actually, bowling is one of the top team-building exercises a lot of businesses will do."

When Simon purchased the building, he said he expected to see a surge in bowling.

"We actually had two new leagues join this year, and they're coming back," Cudmore said. "The existing leagues that were here, they've added more teams."

"We are also adding a three-man Sunday morning league, which is new," she added. "They've approached us. We didn't think of it. We had enough people come that wanted to do it that we said (OK)."

Lewiston-Porter High School has returned to the venue, and will use the LEC for its bowling matches.

"People are coming from the Falls-Wheatfield-area just to come down to bowl," Crane said. "I could overhear people say, 'Oh, we're going to the Event Center. That's the better place to bowl now. Have you been in there?'

Patrons are bowling, but they're also coming to the LEC to eat.

"People really enjoy the pizzas and the wings," Crane said. "People will come in and just order pizza and wings."

"People come in here that haven't been in here, and they're like, 'Wow. What happened?' " Cudmore said.

This summer, while construction is taking place inside, patrons can take advantage of two outdoor volleyball courts that were built last year. Additionally, "We're talking about maybe doing a farmers market outside," Crane said. "Let people set up their fruits, vegetables, whatever have you, just to bring in some more business. There's so much that can be done with that space down there (alongside the bottom of the two-story building)."

"We're reaching out to the (local) farmers to see if it's something they want to do," Cudmore said. "They could come and certainly setup their stands and just see how it's received. The weather would not be an issue, because they're under cover."

Whether bowling inside or playing outdoors, Cudmore said guests will enjoy their LEC experience.

"It's all about the customer," she said. "We want everyone to come in here to leave having a positive thought when they leave. ... People come in here, and they have a good time."

The Lewiston Event Center is located at 845 Cayuga St., Lewiston.