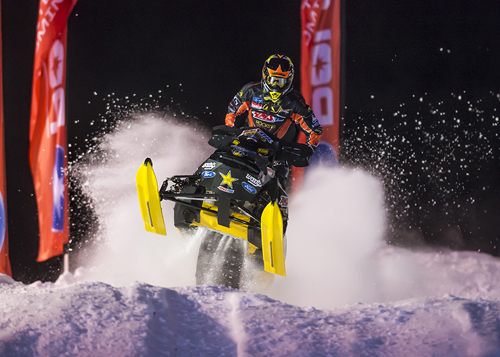 With some of AMSOIL Championship Snocross' tightest racing quarters of the eight-round season, Seneca Allegany Casino & Hotel provides a unique setting for the world's premier snowmobile racing series. Fans that pack the casino grounds and grandstands will witness a grueling gladiatorial-like battle of man and snow machine, the likes of which will have them on their feet for much of the main event.

"Seneca Allegany is one of two stops (on) our eight-round tour that's much like a NASCAR bullring-style race. Tight quarters, bar-to-bar racing action, bumping and banging - it's rough on our racers, but especially thrilling for the fans in attendance," said Carl Schubitzke, ACS president/race director. "The track provides amazing action, and is located in a new area on the casino grounds where there's not a seat in the house where you can't see all action taking place from one end of the track to the other."

So far this season, Tucker Hibbert (Monster Energy/Arctic Cat) has been untouchable in the premier Pro Open class, sweeping first place at both the Duluth opener and again in Bessemer, Mich., at Blackjack Ski Resort. Other Pro Open racers to keep an eye on include Arctic Cat racers Cody Thomsen and Logan Christian, along with Ross Martin and Kody Kamm, and New York's Jake Scott - all on Polaris sleds.

Again this year, multiple AMSOIL Championship Snocross classes - from kids and top area amateur snowmobile racers to women and the pros - will rush around the oval circuit at Seneca Allegany Casino & Hotel, flying over manmade jumps that send the 400-pound sleds hurtling well past 100 feet through the air. High speeds and shoulder-to-shoulder racing action creates a snow machine racing spectacle the likes of which will draw fans from all over the region - creating an economic windfall for the City of Salamanca and its businesses.

Times: Gates open at noon on Friday, 8 a.m. on Saturday

Beginning with AMSOIL Championship Snocross' season-opening round in Duluth, Minn., and running through the season finale in Lake Geneva, Wis., CBS Sports Network will air 16 half-hour programs of the ACS races.