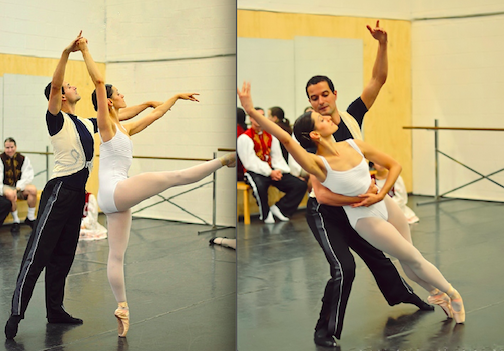 The Greater Niagara Ballet Company brings "Coppélia" to the Artpark & Company Mainstage Theater for two shows on Saturday, Aug. 17. Ballet's great comedy will be performed at 2 and 8 p.m.

"Coppélia," with its roots tracing back to E.T.A. Hoffmann's 19th century "Der Sandmann," is described by The Kennedy Center as "a story of mistaken identity and a beautiful mechanical doll."

In the story, Coppélia (Gianna Guerrucci) sits on her balcony all day reading and speaking to no one. A boy named Franz (guest artist Georgi Rusafov of Bulgaria) falls truly in love with Coppélia and wants to marry her - even though he is already engaged. His fiancé, Swanilda (guest artist Natalia Velarde of Bolivia), sees Franz throwing kisses at Coppélia, but she soon learns that Coppélia is actually a doll that belongs to the mad scientist Doctor Coppélius (guest artist Thomas DiSalvo)! Swanilda impersonates the doll in order to win back Franz. Chaos ensues, but soon all is forgiven. Swanilda and Franz get married, and several festive dances celebrate the occasion.

"Coppélia" was originally choreographed and staged by ballet masters Arthur St. Léon, Marius Petipa, Lev Ivanov, Enrico Cecchetti and George Balanchine. Its debut at Artpark marks the return of ballet to the Lewiston performing arts venue after a decade-long absence.

Tickets for "Coppélia" are priced at $40 (adult grand tier center sections), $25 (adult first tier and grand tier far wings) and $15 (all children under age 12). Tickets are available at the Artpark box office and through www.tickets.com. Those purchasing 10 tickets will receive 10 percent off their total order.

"Coppélia" is presented by the Greater Niagara Ballet Company in conjunction with KeyBank and The National Ballet Institute through a grant from The Oliver G. & Sarah Sloan Bauman Fund for the Arts.

The Greater Niagara Ballet Company is proud to blend the modern needs of today with the timeless beauty of the classical arts. Under the direction of Beverley Feder, F.I.S.T.D., the not-for-profit company continues to provide local dancers with the unique and rewarding opportunity of developing their talents in a professional theatrical setting while working with trained dancers from all parts of the world.

Georgi Rusafov is a graduate of the National Dance High School in Sofia, Bulgaria, where he studied under Peter Koldamov. After graduation, he joined the National Opera and Ballet (Sofia). Rusafov received an advanced master's degree in education for choreography and Vaganova ballet pedagogy at Bulgarian National Music Conservatory - "P.Vladigerov" - in Sofia.

Rusafov has performed as a soloist with the Bulgarian National Opera and Ballet, and Estonia National Ballet. He was a principal dancer with Milwaukee Ballet, Northern Plains Ballet and Omaha Ballet Theater, and a company member with Ballet Arizona. He toured in Spain, Greece, Egypt, Germany, Holland and Italy as principal dancer with Bulgarian National Opera and Ballet and Russe State Ballet. He also performed as a principal guest artist with San Diego City Ballet, West Arkansas Ballet, Alamo Arts Ballet Theater, National Ballet Theater and Russe State Ballet.

Currently, he is artistic director of Youth American Ballet Company.

Natalia Velarde was born in Bolivia, where she began her dance education with Monica Camacho and Irina Yakimova at Summa - Artis, Escuela de ballet clásico y contemporáneo in the city of La Paz. Later, she moved to the U.S. and continued her training at the National Ballet in Maryland, under the direction of Pamela Moore.

In 2011, she graduated with honors from Goucher College with a B.A. in dance and a concentration in arts administration. There, she studied and performed with many guest artists and choreographers, including Brian Reeder (American Ballet Theater), Dermot Burke (Dayton Ballet), Jessica Lang and Thaddeus Weidman Davis. At Goucher College, she was chosen as a soloist for the reconstruction of Michel Fokine's "Niana's Maiddens" by the Fokine State Archive.

Upon graduation, she returned to the National Ballet Company and is now working on her Cecchetti diploma and teacher's exams. Currently, she is a member of Deep Vision Dance Company - a thriving modern dance company in Baltimore - and is part of its mentorship program, which was created to encourage, help and support young dancers and dance in the community.

She is a guest artist and teacher at the Ballet Oficial de Bolivia, whenever she visits her native country.