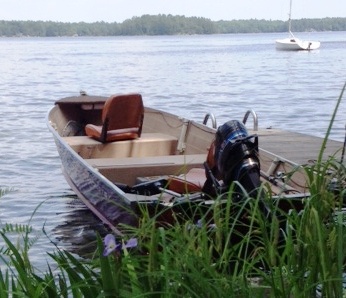 Last week, I told you a story about fellow Lower Niagara Moose member Ken Ashley, and his adventure of fishing the first time in his new fishing boat that he bought from Danny Nassioy. I mentioned how Ken embedded a hook in his leg after landing his first fish, trolling in circles, and confusing his wife, Jan.

I also mentioned Ken was going back to his cottage in Ontario on Lake Muskoka the following week. In my story I noted that Ken had to defend himself when Jan picked on him that he had never fished before. Ken quickly shot back, "I did so, I used to fish when I was a kid. I caught fish before."

I found out it was over 50 years ago, and in all possibility, with store string, a safety pin and a stick. And Ashley is still talking to me after that first story.

I received a few emails on this; one was from Ken's 43-year-old son, Anthony, who with others had went to the cottage on the Fourth of July weekend to challenge the fish once again. Anthony said he never saw his father fish in his 43 years, but was invited to go out on the lake and fish with dad. "We (went) out on the small boat to a location where Ken sees fish on the fish finder; we stopped the boat and turned on the electric trolling motor, which apparently only goes in circles because my father only turns the handle all the way to the left or all the way to the right ... you literally get dizzy from his trolling motor skills," said Anthony.

The two stopped the boat over a rocky area and started fishing. Ken had a jointed Rapala fishing lure, the floating kind, and he cast it out about 10 feet then let it sit there. Anthony suggested he reel in the line so the lure would have some action to it to attract a fish. Apparently it worked.

"A few minutes later he (Ken) gives out a Homer Simpson-style 'D'oh!' and sure enough he has a fish," said Anthony. "He reeled it in and it was hard to tell which one was the fish and which was the lure because they were about the same size. I told him that it didn't count because your catch has to be larger than your bait."

That kind of fishing went on for a while, and the two eventually called it quits for the day.

Day two was filled with adventure that morning. Someone told "Captain Ken" to fish up by the narrows, that he could catch some good-sized fish up there. Heading out, Anthony thought they were going to cross the entire lake until the boat slowed down and dad started trolling with his 30-pound thrust electric trolling motor, zigzagging left, then right, in and around the small islands of Muskoka Lake. At times they were in more than 120 feet of water, where a lot of fish was showing on the fish finder.

Apparently there was also a lot of "structure" (rocks and other underwater debris) there, and the captain was excited, because on his last trip he was told he had to find structure if he was going to catch fish, and to fish that structure area. After getting all set up with lines in the water and now trolling, Ken bellowed to Anthony, who was up front, "Now this is how to fish."

Anthony later remarked in his email, "Now, I have never trolled for fish in my life and I am pretty sure neither has he. We did this for about an hour with no luck at all."

Anthony then suggested the two fish the shoreline for bass. Before long, the captain snagged on to a dead log underwater. "After watching my father struggle with his rod, trying to release his snagged lure, I offered to take the pole from him and I thought he would ease up to the snag so I could try to get it free, but he proceeded to run over the line, and the line snapped and he lost his lure."

That was the end of that episode.

Next, they returned to the rocky area where Ken caught his first fish of the day with the lure that was bigger than the fish. By now, Capt. Ken was getting the hang of casting out his line and reeling back in. With Anthony up front and Ken in the back, both were casting around the boat hoping to latch on to a fish, then bam! Anthony felt something hit him on the shoulder. He looked and here was a hook imbedded in his brand-new shirt. Ken came to the rescue, grabbed his pliers and started to work the hook out of the shirt. Anthony, laughing, looked at his father and said, "I'm telling." Back at the cottage, he did tell everyone about his father's antics.

Later that day on shore after abusing his father the two sat down by the water where a close family friend, Danny Smith, was looking at the boat. Danny noticed the transducer from the fish finder was pointing upward to the sky instead of downward into the water. A transducer is the part of the fish finder that is fastened to the back of the boat and this gizmo sends the signal down into the water and it reflects back to the fish finder with a signal that indicates fish below or underwater structure, and depth. So the ribbing started all over again on the captain, with Anthony and Danny asking him if he was tracking birds rather than fish, and if the big one on the screen was a 747 or something.

In the photo is the Starcraft boat Capt. Ken and his family use on Muskoka Lake. The boat is moored at the dock out front. The boat holds its own personal record of having the one keeper-size fish on Muskoka Lake, the bass caught in the first story of the first trip.

From this story you see what I'm talking about when I say, "take a kid fishing." They don't have to be little to have fun, even kids as old as Anthony have a ball, and I'll bet neither can wait until they both get out fishing again. When I travel with my older kids, the ribbing doesn't end at the landing dock either.

Last week, I got an email from Gloria Costrino, who lives on Johnston Drive off Lake Road in Youngstown. She mentioned she saw and heard a bobcat in her yard. "I was in my yard the other night on the phone, looked over, and she (or he) was standing next to a tree staring at me. I ran in the house to get Lou but it was gone by the time we came back out," Gloria wrote. She said she was a little freaked out when she saw it and wasn't sure what to do.

I told her "Do nothing, it will not bother you, will not hurt you. They don't like people and will move away from people." I also told her that she is one of the few people to ever spot one around here or even in Niagara County. Gloria is a former waitress at the Youngstown Village Diner in Youngstown.

This contest happens to be the longest continuously running bass contest on the entire Niagara River. Phone Capt. Steve Drabczyk at 716-807-6111 for all the details. On Saturday Aug. 24, the Anglers will hold its long-running annual Lower Niagara River Walleye Contest. Both of these contests offer some nice cash prizes, so, if you are into fishing, call Steve and he'll give you all the details.