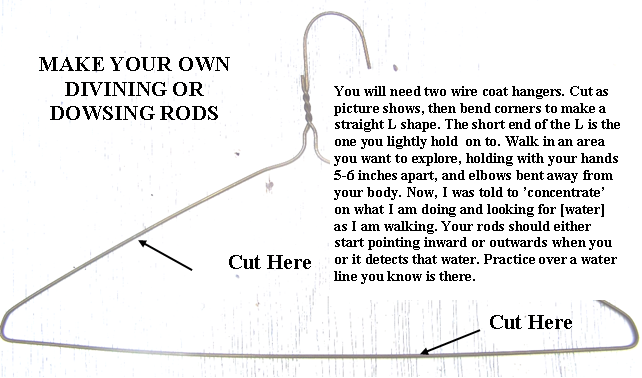 OK, you don't need an imagination here; what I am going to tell you I believe is true.

Water witches are people who can find water, unscientifically, deep under the ground with a tree branch shaped like a Y or two wires bent in the shape of an L, made from a simple wire coat hanger. In fact, there are scientists, engineers and professors who will argue until they are blue in the face, that you can't find water underground by using a Y stick or bent wire shaped like an L. They'll tell you there is no scientific evidence that anyone can find water in this way.

Water witches in more modern days are called "dowsers." "Dowsing," it is said, is a very unscientific way of finding water underground. A few weeks ago the Discovery Channel had a show called "Backyard Oil." I saw men dowsing for oil, and very successfully I might add. When dowsers are looking for oil, it is called "doodle bugging."

On the show I saw a man was doodle bugging, and pointed out an area to drill for oil. The show takes place somewhere in Kentucky, and a lot of these people have become what they describe as backyard millionaires, dowsing and drilling their own wells. Drilling wells can become expensive, and scientific exploration can add to that cost. Doodle bugging, they found, was a more accurate way of finding oil.

Dowsing goes back to ancient times, the times of the pharaohs, Moses, and others of those eras. As in everything else, there are skeptics like those engineers, scientists and such as mentioned above. Guess what, like many of you that have experienced dowsing by doing it yourself, maybe you know someone that is actually a dowser, or maybe you never heard of dowsing.

I am not a dowser. I found that out as I stood next to a friend that was one. He tried to show me how to clear my head, with a dowser stick in my hand, and walked me through the process all the while his stick was pointing to the ground showing me how his was working, and how his stick was pointing to the ground. His stick even showed which way the water was flowing underground.

A friend of mine, John "Johnnie Greengrass" Tower who worked for the Town of Porter, was a dowser. When the sewer/water department needed to locate a waterline that was unmapped underground, he was the go-to man. He took out his divining rods - he had the L-shaped devices - and would be able to tell you where that underground water pipe or drain was, and which way the water was flowing. This all sounds paranormal, something that takes place outside of scientific explanations, but here it is.

My brother, Ed, and his wife, Gerri, bought a house in Cambria several years ago, and every spring their basement would flood. The former owner warned them that this house had that problem since it was built. After a couple very wet springs, even with additional sump pumps running, the flooding always got out of control. They called a contractor to see what could be done.

The contractor, Bob MacVie Construction in Youngstown, came to the rescue. After looking around the area in question and not being able to identify exactly where the water was coming from or going to, he had an idea and advised to get a dowser to make a decision as to exactly where to dig. A dowser was called, a lady from Lewiston that is well known for her experience, and in a matter of minutes described to MacVie exactly where to dig, how wide, and how deep to go. She described it as an underground stream that would overflow and consequently end up flooding the basement, because it flowed right beneath the house. Lo and behold she was right on the money. MacVie dug and installed a large drainpipe, and diverted the water to a lower ditch, ending the problem.

Youngstown native Art King is another dowser known in the area. For years, his neighbors and friends have called upon King to come to their place, dowse and tell them where to dig for water in their yards. Again, he was the go-to man. He dowsed for his own well, dug and found water in the back of his yard.

Dr. Paul Vendrell, an educator at the University of Georgia, visits my neighbors each summer for a couple of weeks. He is an avid fisherman and a well-schooled individual. He and I would go at it when it came to dowsing and dowsers. He was a non-believer, and he ran with the fact that there is no scientific evidence of it being possible. He might have been right by saying there is no scientific evidence, but admits I am right; I saw it happen in front of my own eyes.

I would like to know what other people think, and if you have had experiences in dowsing. Do you know a water witch? Did you ever witness it being done? Let me know. Email me at [email protected].

Food for thought: If you lost your left arm, then your right arm would be left. Huh?

Take that neighborhood kid fishing if you don't have any of your own, and do not forget the elderly, they would love to go too. Be sure to visit www.OutdoorsNiagara.com for the latest in fishing information, and be sure to check the Lake Ontario web cam while you are there. It will give you live lake conditions for sailing, boating, or fishing real time.