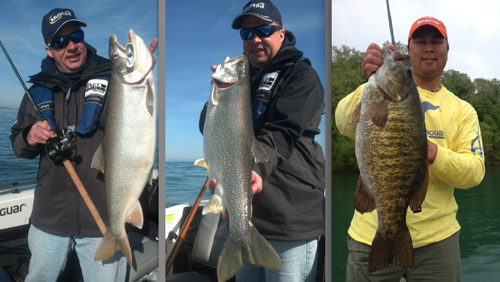 The Niagara Tourism and Convention Corp. helped to land some big ones in the outdoor media world. Writers from top outdoor publications including Field and Stream, Bassmaster and The Outdoor Channel visited this spring.

"May is one of the best times of year for sportfishing in Niagara USA," said Bill Hilts Jr., outdoor sports specialist at NTCC.

Pictured above, left, Jeff Pierce of Scottville, who is national sales manager with Mustad Hooks, hosted a television show with Mid-West Outdoors on the Niagara bar catching fish like these.

Gerry Benedicto of Plainview, right, the national sales manager for Seaguar Fishing Line, is shown with a lower river smallmouth bass that tipped the scales at nearly 7 pounds. He was fishing with Capt. Frank Campbell of Niagara Falls. (photos courtesy of Hilts)

Having worked up a mighty hunger, several fishermen stopped by Brio in the Village of Lewiston for dinner, as shown in the second picture. (photo by Joshua Maloni)