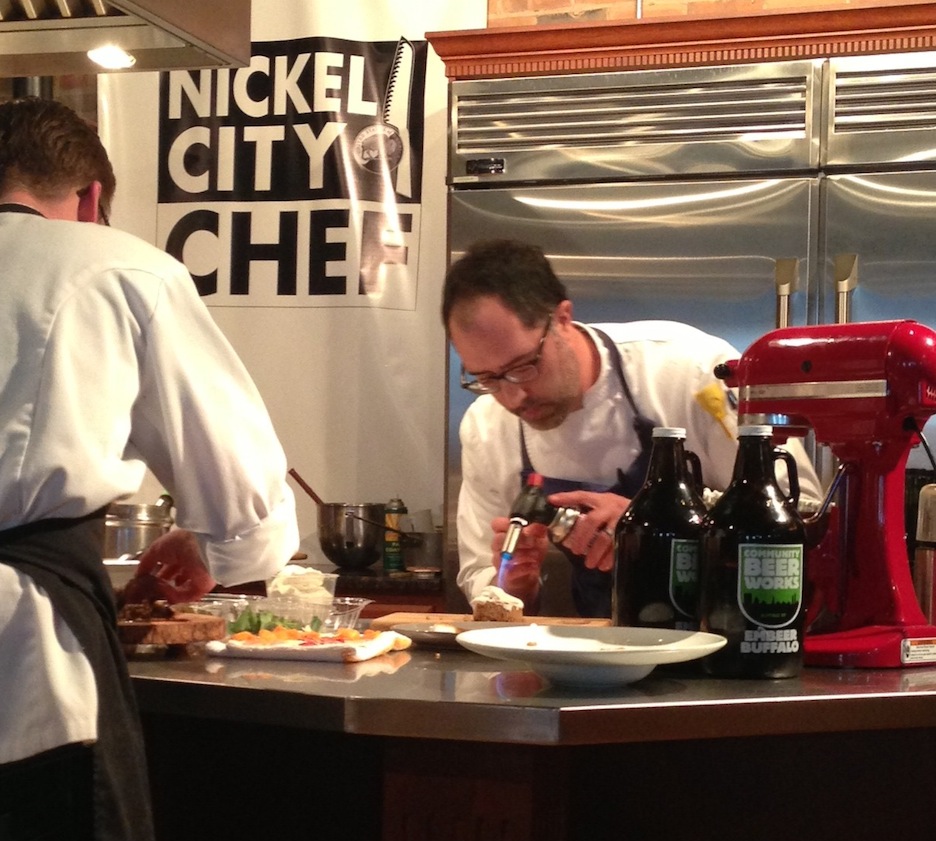 Chef Carmelo Raimondi prepares one of the dishes he entered as part of the "Nickel City Chef" competition. (photo by Vincent Rossi)

Chef Carmelo Raimondi and sous chef Bruce Wieszala of Carmelo's Restaurant were selected to compete last Sunday as challengers in the annual "Nickel City Chef" competition at Artisan Kitchens and Baths in Buffalo. Their opponents for this sold-out event were Nickel City chef Brian Mietus and sous chef Ronald Rytel of Bacchus restaurant, which is located in the Queen City.

The competition required each chef to prepare a three-course meal in 60 minutes, incorporating a secret ingredient into each dish. The secret ingredient selected for the chefs was Belgian beer. Keeping with the local ingredients theme, Community Beerworks supplied its "De Maas Amber Ale."

Raimondi's three dishes were "Beer Barley Risotto Style" as his first course; "Pork n' Beer," a beer-brined tenderloin, as his second course; and a "Spiced Beer Cake" accompanied by a beer ice cream as his third course.

Knight said the standout dish was the beer barley. "You should give that to every young chef as an example of how to cook," she said.

After careful consideration from the judges, Carmelo's Restaurant was declared the winner by a score of 56 to 41.

Raimondi and Mietus were recently chosen as two of the "Best Chefs in America" in the book "Best Chefs America." Anyone interested in purchasing the book can do so by visiting www.bestchefsamerica.com.