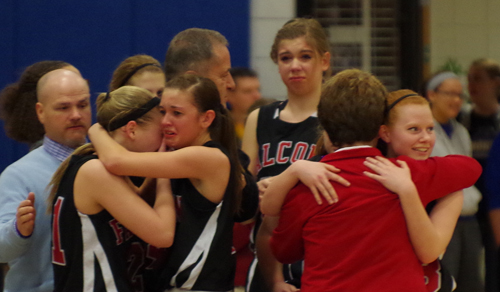 Members of the Niagara-Wheatfield girls basketball team gather on the sidelines as the Section VI Class AA championship game comes to an end. (photo by Larry Austin)

After knocking off two higher seeded teams in the Section VI Class AA girls basketball tournament, Niagara-Wheatfield went down to defeat to top-seeded Jamestown 97-63 in the tournament championship game Tuesday.

The Raiders raced out to a 22-6 lead, thanks in large part to a full-court press that forced the Falcons into numerous backcourt turnovers that often ended up in the hoop. Annie Campion had 13 points to lead Jamestown in the first quarter.

The Raiders took a 53-33 lead at halftime. They rotated 11 players in and out of the game, with starters subbing back in the game until three minutes remaining in the contest, holding a 30-plus point lead.

"They go quite deep and they're able to send their players in waves, and they trap the ball really well and caused us to make some turnovers," Fegatilli said.

When N-W handled the ball better in the second half, Jamestown began to rain down three-point shots, nailing five in the third quarter alone. Rosa Velazquez and Karisha Tapia had a pair of treys each in the third stanza. Fegatilli said that because the Raiders all have the quickness to get to the rim on the dribble, they can kick the ball out for the open spot-up three-point shot. The Raiders led 80-45 after three quarters before backing off the press.

Rachel Pawlak led N-W with 21 points and Melissa Smith had 16.

N-W's season ended with a 15-7 record. The Falcons beat Grand Island (who won a Class A title Tuesday) in the last Niagara Frontier League game of the season, and added wins over third-seeded Lancaster and second-seeded Lockport in the Class AA tournament. N-W hadn't beaten Lockport in about 10 years.

"The forwards really improved from the beginning of the season till the end. Every day at practice they got better and better," Fegatilli said of the strong finish to the season. "Allyson Czaja came into her own. Kirsten Klettke and Melissa Elnicki improved and we just became a better inside team, too. We were able to rebound much better by the end of the season."

"I think we just started realizing how good of a team we were and that we had it in us all along, and that we just had to believe in ourselves," Pawlak said of the late-season surge. "It got us this far, and I couldn't be more proud of my team for that."

For Smith, the closer they got during the season, the better they played and the harder it is to say goodbye.

"I'm going to remember everyone, every player I played with throughout these years," Smith said of her N-W career, including her coach, who she said has had impacted her life "more than words can describe. She's been a big aspect and she's helped me through so much on and off the court."

"I'll never forget this. This was just such an amazing season and we worked so hard," Pawlak added. "It's really hard to see it come to an end, but I'm also thankful for everything we've done this year."