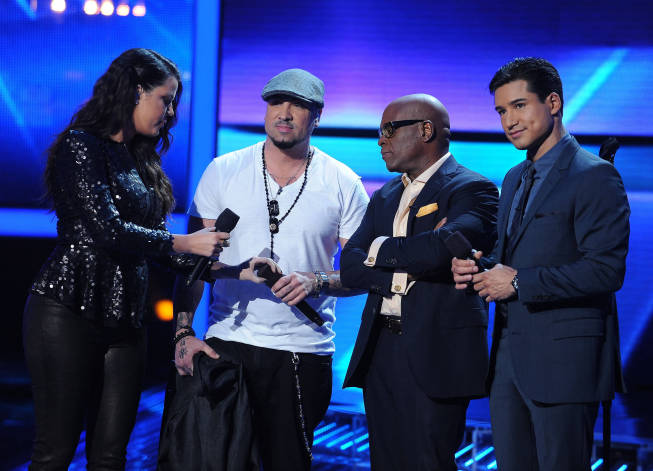 Paige Thomas and Vino Alan eliminated on 'The X Factor'

Season one winner Melanie Amaro returns to "The X Factor" on Thursday, Dec. 6

Thursday, on the live results show, another double-elimination sent home Paige Thomas, one of Demi Lovato's "Young Adults," and Vino Alan, one of L.A. Reid's "Over 25s," on "The X Factor."

Hosts Khloé Kardashian Odom and Mario Lopez announced that Thomas received the fewest votes following the performance show, immediately eliminating her from the competition. Then it was revealed that Alan and Diamond White both received the next fewest votes. Judges Simon Cowell, Lovato, Reid and Britney Spears listened to the two finalists each perform their "song for survival," after which Alan was sent home.

Also Thursday, this week's individual vote rankings were revealed, from the bottom sixth act to the No. 1 vote-getter.

Immediately after the performance show, fans will be able to vote via 1) Verizon Touch Voting on The Xtra Factor App on Verizon Android devices; 2) toll-free calling; 3) text messaging for Verizon Wireless customers; and 4) online at TheXFactorUSA.com. Fans with valid Facebook accounts can also vote at Facebook.com/TheXFactorUSA.

On Thursday, Dec. 6 (8 p.m.), tune in for an all-new episode with performances by Melanie Amaro, last year's winner of "The X Factor," who returns to the stage to perform a new, never-before-heard single from her debut album, "Truly...". Additionally, global superstar Ke$ha will debut her new single, "C'Mon." Then, Khloé and Mario will announce the acts that made the cut and who will be going home in an all-new "Live Results" episode.

Amaro became an instant national phenomenon, bringing her long-honed vocal prowess to "The X Factor" stage, and claiming first place in the heavily contested competition during the series' first season. Now, the 20-year-old powerhouse is set to release her hotly awaited debut album, "Truly," on Epic Records. The album, due out early next year, announces Amaro as both a silk-voiced songstress and dance-floor-ruling diva. Spotlighting the masterful range and soulful sensibility that won over "The X Factor" judges and audiences alike, the album merges R&B and dance-pop to expand Amaro's sound and push her vocal performance into stunning new directions.

Global superstar Ke$ha has taken the world by storm since the 2010 release of her debut album, "Animal." That year, she was declared Billboard's Hot 100 Artist and her smash debut single, "TiK ToK," reached No. 1 on Billboard's Hot 100 chart. It was the most played song of that year, and also was the biggest-selling digital track in the world. On Dec. 4, Ke$ha will release her highly anticipated sophomore album, "Warrior," featuring the single, "Die Young," which is currently the No. 1 Top 40 Airplay single.

FOX Super Perks is offering fans a chance to win a once-in-a-lifetime experience - a trip for two to Los Angeles to see the two-night season finale of "The X Factor" when the next global superstar or breakout music group wins. Details can be found at www.fox.com/thexfactor/superperks/.

No purchase necessary to enter or win. Find official rules available at www.fox.com/superperks.