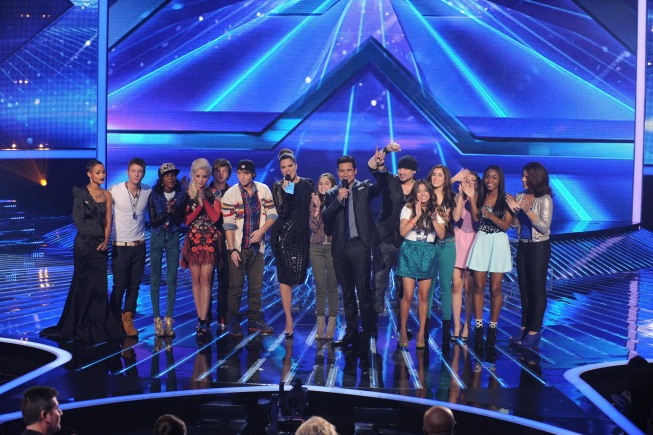 Thursday, on a special Thanksgiving night live results show, and in another double-elimination, Arin Ray, one of Britney Spears' "Teens," and Beatrice Miller, another of Spears' "Teens," were eliminated on "The X Factor."

Hosts Khloé Kardashian Odom and Mario Lopez announced that Ray received the fewest votes following Wednesday night's performance show, immediately eliminating him from the competition. Then it was revealed that Miller and CeCe Frey both received the next fewest votes. Judges Simon Cowell, Demi Lovato, L.A. Reid and Spears listened to the two finalists each perform their "song for survival" and, after deliberation, Miller was sent home.

Also Thursday, this week's individual vote rankings were revealed, from the bottom eighth act to the No. 1 vote-getter.

Immediately after the performance show, fans will be able to vote via 1) Verizon Touch Voting on The Xtra FactorApp on Verizon Android devices; 2) toll-free calling; 3) text messaging for Verizon Wireless customers; and 4) online at TheXFactorUSA.com. Fans with valid Facebook accounts can also vote atFacebook.com/TheXFactorUSA.

On Thursday, Nov. 29 (8 p.m.), Grammy Award-winning R&B singer/songwriter Alicia Keys, and Josh Krajcik, a finalist on last season's "The X Factor," will perform. Then, Khloé and Mario will announce the acts that made the cut in an all-new "Live Results" episode.

Krajcik became nationally known as a finalist on "The X Factor," and was the runner-up on the singing competition series' first season. Originally from Columbus, Ohio, he got his start singing in bars at the age of 15. After playing in several bands, including the Josh Krajcik Band, a three-piece blues-rock outfit that toured with the likes of Corinne Bailey Rae and The Fray, Krajcik auditioned for "The X Factor" in 2011. An instant hit among fans, his audition video has garnered more than seven million views on YouTube. He went on to become one of the top finalists, earning a spot in the "Over 30s" category mentored by season one judge Nicole Scherzinger.

Since his success on "The X Factor," Krajcik has been touring nationally and writing and recording tracks for his debut solo album that pair his powerful vocals with intensely passionate, soul-infused songwriting. His single, "One Thing She'll Never Know," will be released next week and the full-length album will be out in the spring of 2013. Krajick has teamed up with premier songwriter/producers on the album, including Eg White (Adele, Pink, Florence and the Machine), Steve Kipner (Christina Aguilera, Janet Jackson), Chris Seefried (Haley Reinhart, Lana Del Rey) and Steve Robson (Lily Allen, Rascal Flatts, James Morrison).

FOX Super Perks is offering fans a chance to win a once-in-a-lifetime experience: a trip for two to Los Angeles to see the two-night season finale of "The X Factor" when the next global superstar or breakout music group wins. Details can be found at: www.fox.com/thexfactor/superperks/.