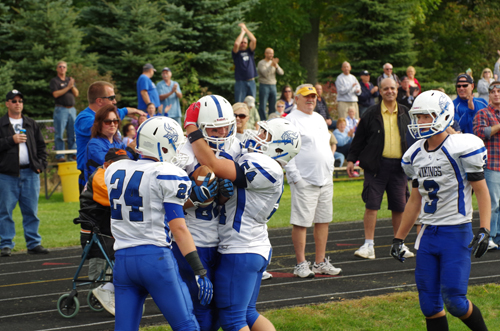 With the win, GI improved to 5-0 in Section VI Federation football.

It was the second time in the game the Vikings had scored with a no-huddle offense. Danny Blocho capped a drive with a three-yard pass to Connors in the end zone just before halftime. It was Connors' third TD catch at that point. He finished with eight catches for 81 yards, and also had six tackles with two sacks on defense.

Leading 20-7 at halftime, GI saw the Spartans take the lead 21-20 thanks to two plays longer than 80 yards, Santorio said.

GI stopped the Spartans near midfield with under four minutes left and took possession at their own 37.

Corrao made "a huge completion," Santorio said, of 25 yards to Connors to the North 15, and passed to Connors again at the 1. From there, Corrao scored on a sneak with 15 seconds to lift GI into the lead.