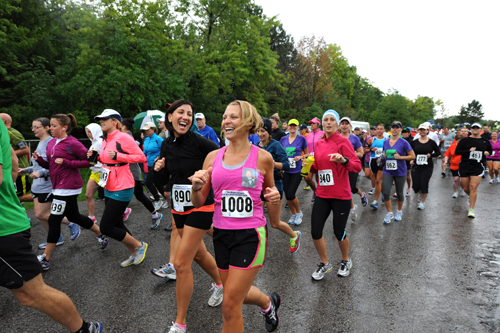 A total of 925 runners weathered cold, rainy conditions for a good cause as the first-ever Mighty Niagara Half Marathon to benefit Niagara Hospice took place Saturday morning along a course from Artpark in Lewiston to Porter on the Lake.

Complementing the highly popular Hospice Dash 5K Walk/Run, now in its fourth year, the new event featured scenic runs for participants along the lower river, Fort Niagara and the Lake Ontario shore, entertainment at various locations, and an after-party at Porter on the Lake with Strictly Hip.

In the photos, roadside entertainment and a race scene along Lake Road in Porter and runners at the finish line at Porter on the Lake. (photos by Niagara Hospice and Terry Duffy)