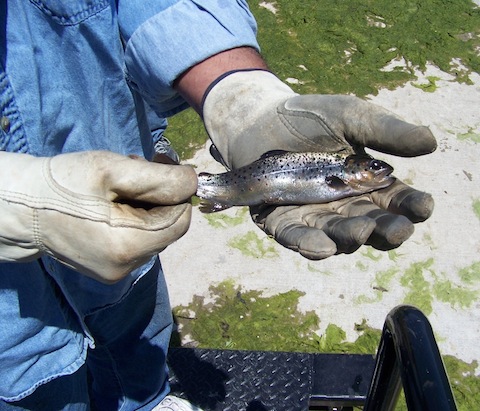 Fish stocking: See how it's done and why

Money is all derived from license fees and in each state throughout the U.S., a 10 percent flat federal tax is collected on recreational goods, from the Wallop-Breaux Tax Act. Everything purchased is taxed from fishing tackle, guns and ammo, boats, gasoline, etc. The federal tax collected is then doled out to each state, with amounts depending on license sales and the land and water area in each state on a 60-40 split. This program was initiated by sportsmen and conservationists to provide the states with funding for fish and wildlife management and research, habitat acquisition and sportsmen educational programs. In other words, sportsmen pay their own way, not just fishing, but hunting, too.

On Saturday, April 9, there will be a state Department of Environmental Conservation hatchery truck arriving to stock a load of baby brown trout, numbering roughly 4,440, at the Lewiston Landing. These tiny tots will be about 8-9 inches when stocked. The truck should arrive at about 10:45 a.m. The trucks are large, equipped with oxygenated tanks, and if you go bring a camera and stay out of the way of the workers. Releasing these fish doesn't take long, so get there early in case the truck arrives early. It's a good event for the kids to learn about, and maybe a good thing for a school project.

When you see how small these little brown trout are when they are stocked - then grow in size up to 30 pounds - you will be amazed. A New York state-record brown tipped the scales at 33 pounds, two ounces, caught in Lake Ontario, in June 1997. These baby browns were incubated and raised at the Rome Fish Hatchery north of the city of Rome, east of Oneida Lake. Annual fish production in New York alone reaches 1 million pounds of baby fish, salmon, trout, etc., raised and stocked in freshwater waters throughout the state. Why? Two good reasons, and off the top of my head: to improve and sustain recreational fishing, and to restore native species that once called our waters home.

Pictured is a little brown trout that jumped out of the tank at a stocking site in Wilson while attempting to transfer it to his new home.

Other spring hatchery trout stocking in Niagara County waters will be taking place through April and May. Gill Creek and Hyde Park Lake will see almost 2,500 brown trout introduced in April, plus another 100 browns and 200 rainbow stocked at Oppenhiem Park pond in Wheatfield. This spring, Olcott and Wilson will receive 12,500 rainbow trout and 22,180 brown trout each. All counted here is a total of almost 77,000 fish in Niagara County alone, with more to come. Actual stocking dates cannot be determined very far ahead of time because of weather, maturity, hatchery schedules, water temperatures, etc. Another thing that should make local fishermen happy is if there are surplus fish in the hatcheries, they are directed to our area waters; stocking dates go unannounced.

As spring arrives, stocking of area waters gets into full swing along Lake Ontario and the Niagara River. The Lake Ontario Trout and Salmon Association starts their pen raising project with Chinook salmon and rainbow trout, as does the Niagara River Anglers Association pen raising steelhead (rainbow) trout. Wilson has a loose association of dedicated fishermen that created a highly successful pen-rearing project a few years ago in 12-mile Creek. These projects are all volunteer-based, and the work done by dedicated sportsmen. The rearing of these newborn fish get imprinted to these waters, and after being released the great majority return as adults to waters that is familiar to them, spawn, and this gives sportsmen a run for their money and efforts. A great cycle.

County salmon and walleye stocking info will be taken up in a later column.

On the local fishing scene, it is good. The annual smelt run is being watched closely because of the mild winter and water temps above normal right now. Many think it will be an early run. Last year they started running good about April 15 after ice was out. Smelt generally like water temps of 42 degrees before they make their spawning run, and it's close to that temp now as this story is being written. We'll see if the urge to spawn is strictly due to water temps or is Mother Nature going to say, "Nope, not until April 15, my eggs aren't matured yet!"

Olcott and Wilson have been reporting good brown trout action off the piers and further inland. All county streams have been open and are now pretty productive. The lower Niagara all the way out to the green can buoy has been producing lake, rainbow, and brown trout. Go to the Outdoors Niagara (www.OutdoorsNiagara.com) website as fishermen will be posting almost daily on the smelt situation, and don't forget May 4 is the Lewiston Smelt Fest. It is free and open to everyone.