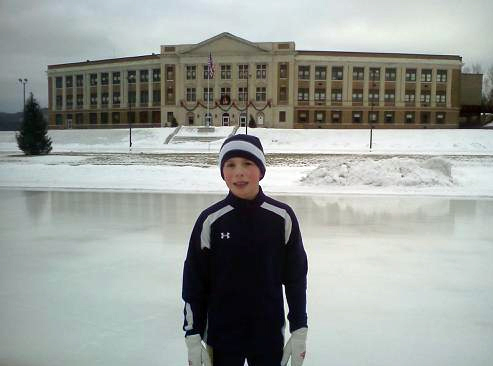 The Empire State Winter Games, a multiple day sporting event, took place Feb. 2-5 in Lake Placid. The games have been a tradition for 31 years, and this year seventh-grade Edward Town Middle School student Fletcher Codd represented the area in the speed skating events.

Codd qualified in short track and long track speed skating for the 13-17 age group even though he is only 12 years old. He has competed in other local area races, but nothing as big as the Empire State Games. Codd has only been speed skating since March.

Codd did not receive any medals at the games, but was proud of his time in the 500-meter race.

"I thought my time of about 1 minute was very good," he said.

There were multiple world Olympians at the event as well.

Previous to the games, Codd trained hard to perfect his skating. In addition to training on the ice, he also had to get used to the different equipment used for the sport, including elongated skate blades for increased speed and performance.

"There is not much difference on the straightaways but on your cross overs it takes a lot more getting used to with bigger blades," he said.

Codd plans to continue speed skating. His goal is to participate in the speed skating national championship. He would even like to be able to take part in the Junior Olympics in Norway.

Codd stressed how great the Empire Games experience was.

"Just to be able to be there was so great," he said.

Matt Canada is an eighth-grader at Edward Town Middle School.