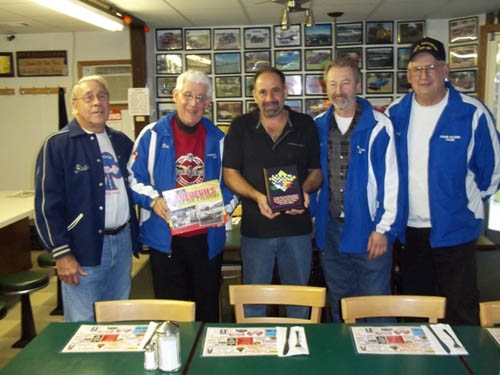 Members of FOAR SCORE, the oldest race fan club in America, recently presented a plaque to Sal and Lisa Buscaglia, current owners of Salisa's All American Diner in Wheatfield, to commemorate the founding of their club at Canino's Restaurant on that site in 1948.

FOAR SCORE is an acronym for Friends of Auto Racing Seeking Co-operation of Racing Enthusiasts.

Canino's, the eatery on that site on Niagara Falls Boulevard in 1948, was a gathering place for race fans of the day. Owner Jimmy Canino, who also worked across the street at Bell Aerospace, was a noted racer of midget cars at such local venues as Civic Stadium in Buffalo and Hyde Park in Niagara Falls. A popular feature of Canino's was the midget racecar on the roof of the restaurant.