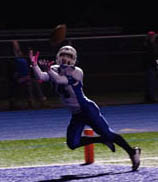 Grand Island put together its most dominating performance of the football season last Thursday to win the Chuck Funke Memorial Classic, 28-0 over Hamburg.

The victory, the third in a row for the Vikings, gave them  a 5-4 record.

Quarterback Drew Chorey connected with Eddie Krecisz on touchdown passes of 18 and 23 yards, and with Ryan Hughes on a 4-yard scoring pass. Anthony Zogaria scored on a 1-yard run.

"I love what we did. It's just a matter of being more consistent. Drew threw some really nice balls today," GI coach Dean Santorio said. "We might make a mistake here or there, but we have confidence in our kids and they did a great job. They did a really nice job moving the sticks, completing passes on third down when we needed to and getting in the end zone."

Chorey was 9-15 passing for 147 yards, three touchdowns and two interceptions. Santorio said Chorey played his best overall game of the year, and he also credited the receivers and pass protection for the offensive output. The 28 points was a season-high for the Vikings.

"The throw to Eddie in the corner of the end zone was a perfect throw," Santorio said of the third Vikings TD that put GI ahead by three scores. "Eddie exploded to it, leaves his feet and catches it. That's what you practice for."

Since a potentially demoralizing 7-0 loss at Williamsville North in midseason, the Vikings won three of their last four games, losing to perennial power Sweet Home after holding a 14-0 lead and beating McKinley, Iroquois and Hamburg.

"We always believe we're getting ready for a game to win it, whether it's Sweet Home, McKinley or Will. North," Santorio said. "So, yeah, I believed we could do it, but sometimes you never know how kids are going to react."

The team was looking at finishing with a losing record, but Santorio said he never lost faith that his team could turn the Viking ship around.