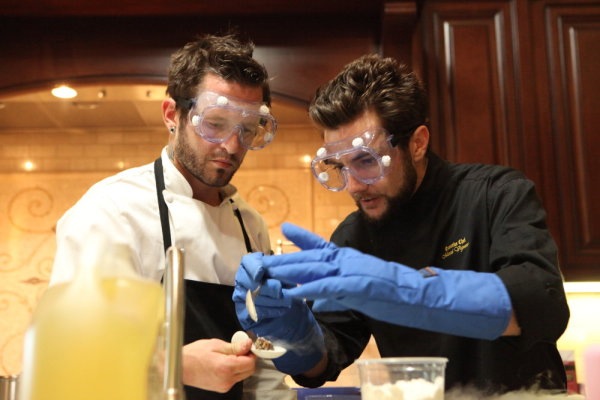 Marcel Vigneron, the "bad boy" of the kitchen on "Top Chef," is back with a brand new series, "Marcel's Quantum Kitchen," and looking forward to television audiences seeing a different side of his personality.

"I hope so," he says. " 'Top Chef' is a - it's a competition-based show that tends to focus in on the most polarizing moments."

The culinary artist, who is often depicted as a troublemaker, is actually quite affable on the telephone. He says fans can expect to see more of his softer side on screen.

"I think that you will get the opportunity to see a different side of me in, albeit, a little bit more well-rounded (way), I must say," Vigneron says.

In "Marcel's Quantum Kitchen," the top chef and a trio of mix-masters team up to blow the minds - and palettes - of partygoers and guests using science-based food techniques (also known as molecular gastronomy).

"It's not a competition show and it's not a demo-style show; it's more so just about showcasing to the public a new style of cooking and basically what happens when you combine a little bit of science, some creativity and a little know-how," Vigneron says. "And I think that the show has the opportunity to kind of open up people's minds and kind of change their paradigms to what food can actually be when combined with those ingredients."

Whether igniting prawns, launching pizzas or tricking watermelons into looking, smelling and tasting like tuna, Vigneron says the goal is simple: please the client.

"For every episode, for every event that we cater, I typically like to get together with my clients and spend a couple days with them doing whatever it is that they do, so that way I can kind of get inside their head and find out what they're all about," he says. "So that way when I go back and develop the menu and go through this brainstorming session with my team, we can actually create these dishes that are specifically designed for our client or specifically designed for this particular event."

Though the Syfy Network isn't exactly known for cooking programs, Vigneron says his show is a perfect fit.

"Well, I know it seems kind of like an abstract fit," he says. "But once you actually see the show I feel like it's totally going to make sense.

"And one of the ways we bridge that gap between Syfy and doing a cooking show and me being on it is the fact that, you know, we focus in on a lot of the same things. Syfy is all about imagining greater, which is essentially what me and my culinary team is all about.

"So we have the same basic philosophy. And we focus in on a lot of the scientific aspect of cooking as well. So you've got a lot of like science, and it's kind of educational. But at the same time it's all about creativity and teamwork. So that's kind of how we (bring) both roads together, so to speak."

"I have an amazing team - and they all have unique talents," Vigneron says. "I've known Devon for quite some time. We actually went to culinary school together way back in the day. (He) is an amazing mixologist."

"And so he actually has quite a - he has some chops inside the kitchen as well. So a really great member to have on my team because of that dichotomy," Vigneron adds. "And then also Jarrid is, you know, Jarrid's (a jack) of all trades. I utilize Jarrid for several different things. And he's a pretty integral part of our team."

Vigneron describes Masse as something of a protégé.

"He's just a great guy to have around because, not only does he cook, but he does all these other - he has all these other outlets that are pretty amazing and that I try to utilize. Whether we're building edible centerpieces for the table or breathing fire, or whatever the case may be, he's just a great guy to have and a great member of the team."

Wilson, meanwhile, "probably has the least amount of experience cooking, but nevertheless is a very important part of the team and really contributes a lot," Vigneron says. "She has more experience dealing with the front of the house and with, like, big business aspect of catering. (That) is something that I definitely wanted to have on my team considering the fact that it's a relatively new company and I needed somebody with experience in that whole aspect - considering I mainly focus in on the cooking."

In total, Vigneron says, "It's a really great group of people. And we have an interesting thing going."

Enter to win a "Meet and Eat" with Marcel Vigneron!