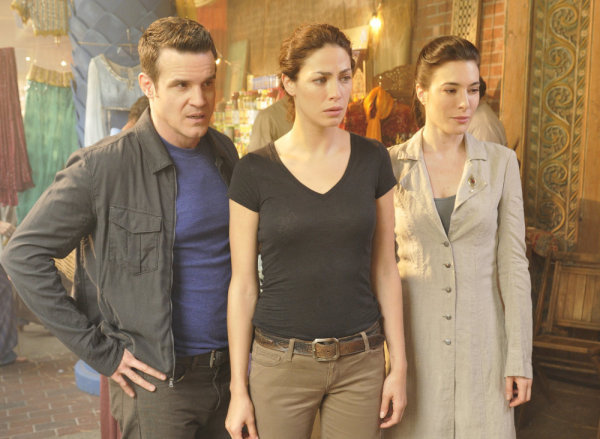 It's unusual to see guest stars have as much of an impact as they have on Syfy's "Warehouse 13." As the show's second season comes to an end (Tuesday, Sept. 21, 9 p.m. ET), the fate of each series star is closely linked with a supporting player who may or may not return for season three.

Secret Service agents Pete (Eddie McClintock) and Myka (Joanne Kelly) are tasked with retrieving "artifacts" -- historic items embedded with mystical powers -- and storing them inside Warehouse 13. In part one of the two-part season finale, they were duped by their colleague, H.G. Wells (guest star Jaime Murray). Yes, it's that H.G. Wells. ... Only female and potentially evil. Knocked unconscious inside of Warehouse 2 in the concluding chapter, Pete and Myka must find a way to escape -- and a way to stop H.G., who finds herself in a deadly showdown with Warehouse 13 supervisor Artie.

Oftentimes, when a show features a guest star, the audience (and this critic, in particular) puts a clock on that actor. It's sort of the old "Star Trek" principal: When Kirk, Spock and three unknown Star Fleet crewmen visited an alien land, inevitably the leads were the only ones left alive. Nowadays, if an actor isn't a regular cast member, it's safe to assume they can be written off (dumped, ditched or killed).

But "Warehouse 13" is different. The show promoted guest star Allison Scagliotti (Claudia) to series regular late last season, and has made every effort to keep non-series regular CCH Pounder (Mrs. Frederic) involved in the storylines.

With that in mind, it's unclear what role -- if any -- H.G., Kelly and Vanessa will play next season.

Speaking with BTS recently, "Warehouse 13" regulars McClintock and Rubinek shed some light on their show's unique approach to guest casting.

Saul Rubinek: It's collected -- wonderful actors. And as the show is getting good reviews from you guys and getting such a large audience, (it) becomes easier for the network, the studio, to attract top-level guest stars because they want to be on the show. And that's just the way the world, that's the way it is for a successful show, and it's great for us. And not only that, as you were saying, you're not really sure whether somebody is going to be there for a while or just for one show.

We are collecting people that have something to do with the warehouse that are -- I guess we're getting a little -- our own little extended rep. company of actors. And they have been wonderful. In the Christmas show (set to air in December), Judd Hirsch, for example, plays Artie's dad. And so there -- you can see that there is a possibility for a life for the characters. Certainly there is a love interest between, you know, some kind of romance going on between (Lindsay's) character and Artie.

And you can see -- and she's the doctor for the Regents, who find out. And it -- I love the fact that there's an extended group of people of wonderful actors that, you know, may take a recurring place in the show. But we're not really sure, are we Eddie? Who is ...

Rubinek: Coming back or who (is) not, you know?

McClintock: Yes. It's always nice to see them back because you make friends with them. And I mean, when I met Jaime Murray, she walked on the set and we shook hands and met. And then 15 minutes later, we were making out (on camera, that is). So it's like, OK, odd. But luckily, Jaime's a great lady and very professional and a great actress. So it's good to have them.

Same can be said for Paula Garces, you know?

Rubinek: And there are nice surprises, you know?

Rubinek: I said there are nice surprises in the people that show up. You know, we don't know.

McClintock: Yes, yes. And it's always good that they can walk and talk. For instance the young guy, Cody Rhodes (Myka's high school crush), who came from the WWE. I thought he did an amazing job, you know, he's ...

Rubinek: It's his first acting job.

McClintock: Yes. When the camera gets in front of your face and it turns around and they go, "OK, it is your turn; it's your shot; it's your close up." You know, the pucker factor can go way, way up. It's a lot of pressure. And the camera is looking right at you. It's a giant eyeball and it's always looking to see if you're lying. And -- so to have guest casts come on and do so confident jobs is -- it's good for us and good for them.

Rubinek: Yes, there's nice surprises. Roberta Maxwell came on the show last year as an agent who worked in Warehouse 13, 35 years ago or 40 years ago. And it was somebody -- (she) was a Canadian actress that I hadn't seen since I was 19, 20 years old, when she was a member of the company at Stratford, Ontario. And it was wonderful to see her and we didn't expect -- and suddenly she shows up again in a very moving episode that was on a couple weeks ago that took place in the '60s. And she came back; we didn't know that she was going to.

And it's always nice so, you know, by collecting wonderful actors, it gives impetus to the writers to say, is there a way to bring that person back, because great guest stars bring something that's indefinable to the writing. It happens with all really good actors. It's one thing to have a wonderful script and the opportunity as a springboard.

But then when these actors come like what happened with Judd Hirsch or what happened with Lindsay Wagner. All of these people, they've brought them to life in a way that's unexpected. And so -- then it reciprocates by having the writers again go, "Wow, we have to do something more with them." And I think you guys are the beneficiary of that.

It's not a predictable show. We don't know. I guess that's what is really cool about it. You said it in your question, you don't know. Are these guys going to stay around? Is this a regular? Is this going to become a regular character? We don't know. If you take a look at an episode back when there was a super hero episode or you take a look at the episode that took place, you know, in Russia, where Artie is kidnapped, I mean there -- it could be -- like they're episodes from two completely different series. The tone, the way they're shot, the way the script is written. Yes, they have in common the fact that we're going after an artifact, but (the writers) have kept this show -- I think they've kept our audience on their toes. You don't really know what to expect from this show from week to week.

We don't as actors. I don't know how actors do it who are on ... even good procedurals, where it's one thing to watch them, it's another thing to do them. You're making a living. It's great. You're -- it's always good to be a working actor. But, you know, it could get a little tiring saying the same lines week after week in a procedural. We are working ...

Rubinek: Book -- yes, but, we don't know what we're going to do from week to week. It's completely different. We have an opportunity to play with the genres in a way. They're different; it's like doing different series every week sometimes, you know?

McClintock: People online are upset because we killed Valda (guest star Mark Sheppard). But what people need to realize -- and I think some people do -- it's like you're never really dead in Syfy. You know, there is always ...

Rubinek: Anything can happen.

McClintock: Some artifact that can -- or some crazy thing that can bring you back to life. So, you're never dead until you are dead.