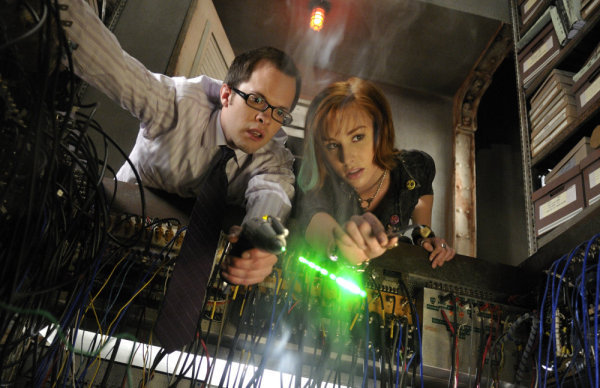 BTS and a few media colleagues caught up with the actors earlier this week to find out more about their crossover episodes.

"I believe that the nugget of the crossover idea began when Neil and I met at last year's Comic-Con, Comic-Con 2009," Scagliotti said. "I watched the ‘Eureka' panel moderated by Josh Gates, which was hilarious. Then, at the Syfy party I marched up to Neil and I said, ‘Neil, let's be friends.' And he said, ‘OK, it sounds good.' We were inseparable from that moment on, and we had this immediate, dorky chemistry where we were finishing each other's sentences and, you know, delivering punch lines at the same time."

"We have the same sense of humor. We did on the set, too," she added. "And it really, you know, our chemistry played so well in life that I think our respective showrunners and, you know, the good people over at Syfy realized what a commodity it can be to blend these shows. But I think one really believes (in these characters) existing in the same universe, and so here we are, Claudia and Fargo, at the center of this awesome crossover event."

In the "Warehouse 13" episode, "Fargo comes to the warehouse to update our computer system. Little does he know that, much like all of the artifacts, the warehouse has an organic human element that it's not as simple to upgrade as just a new plug-in," Scagliotti said. "So the warehouse fights back, because we discover that an important component of the computer system is half of a man's brain.

"So we have René Auberjonois from ‘Deep Space Nine' guesting as a warehouse agent whose brain was compromised. And we - Claudia and Fargo - connect in the warehouse and put their heads together to sort of save the day and avoid the (severe) Eureka (spiders) out to kill them."

Some sparks fly between Claudia and Fargo in the warehouse. That storyline continues when she visits Global Dynamic in Eureka, Ore.

"Fargo obviously has a little bit of a crush on Claudia and starts - I guess he starts making the purple goo that the warehouse uses for the artifacts and sort of synthesizes it," Grayston said. "So Fargo decides to start making a version of that in Eureka and invites Claudia over to come pick up a batch, and then science happens and mystery happens and Claudia helps save the day and solves some puzzles that are happening - and explosions happen and sparks and stuff, and it's a really fun episode."

The crossover episode reflects the growing popularity of Grayston and Scagliotti on their respective series.

"For me, it's just one of those awesome things where I was actually only contracted to be in seven episodes a season," Grayston said. "I was really a tertiary character in ‘Eureka.' And they just sort of kept on chucking me in to the point where, you know, now I'm all episodes, my character is running Global Dynamics, and it's just - it's a nice thing to work hard and try to do the best job you can and have that noticed and have them continue to, you know, employ me. It's awesome."

"And on my side of things, I mean, similarly, when I joined the cast in season one, I came in late; I showed up in Episode 4," she said. "And really by brute force Claudia was an outsider who sort of fought her way in and had to figure out where she fit within this group, but has become such an integral part of the family that, you know, she's sort of everyone's little sister, little nerdy sister.

"And that really mirrors, I feel, my evolution as an actress out and about trying to belong to something, finding her way onto this show and developing such a second family with this, you know, amazing cast and crew. So I've been really lucky to play a girl who's very close to myself."