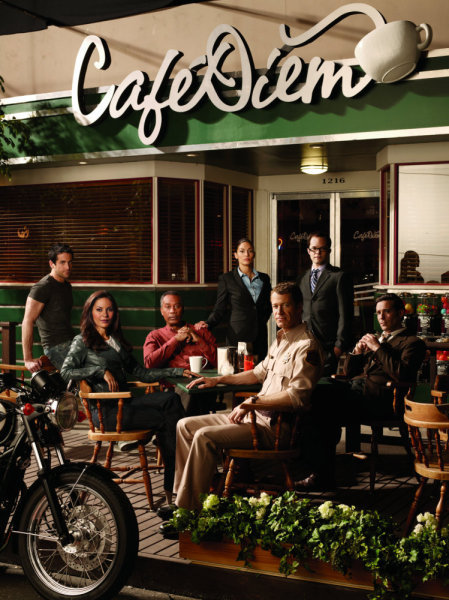 Creator and showrunner Jaime Paglia says, "I think for everybody here it re-energized us, because it was a chance to really kind of reboot in some ways and again embrace the aspects of the show that we've loved, (and) change some of the things that I wasn't necessarily as thrilled about."

"Eureka" is the story of a fictional town filled with super-intelligent, often misguided, scientists, inventors and thinkers. Though these geniuses excel with numbers and charts, they often find themselves unable to deal with real-life problems. Enter Sheriff Carter who, despite his everyman qualities (read: lesser intelligence), is called upon to save the day -- and oftentimes the town.

"I think he still has a good moral compass to him. And he has a good logical head on his shoulders, but no real facility with information," Ferguson says. "So I think he's a follow-the-numbers sort of guy in a town where people are so bright, they're so used to being 10 steps ahead, you know, or 20 steps ahead, that sometimes it is the little things that he's good at focusing on.

"But he also -- and he's a -- or was a federal marshal. I mean he's good at what he does. I think he sort of ‘Columbos' it sometimes. And pretends to be a little, you know, more clumsy than he actually is."

Paglia says different minds work in different ways, and that is Carter's advantage.

"I think that Carter has always been that guy who doesn't get, you know, bogged down in minutiae. He sees the big picture and he picks up the small details that other people might not notice. That his intelligence is -- it rivals theirs. It's just in a slightly different domain," he says. "He may not be, you know, amazing at physics, but he can read people and he can take in, you know, the details and put puzzles together in a different way. So I think that, you know, he can see any situation, and he just sort of sees it slightly differently than the others do."

Despite the time shift and other related changes, fans can expect Carter to continue on as Eureka's knight in shining armor.

They can also expect the sheriff to finally (maybe?) find true love. Last season, he began a relationship with Tess Fontana (Jaime Ray Newman). But, as the two became chummy, she left to take a job in Australia.

Though it appeared Newman had completed her run on the series -- the actress was cast as a lead in ABC's short-lived "Eastwick" -- Ferguson says, "you might be surprised about who comes back this season."

Of course, Carter is still somewhat smitten with Dr. Allison Blake (Salli Richardson-Whitfield), the head of Eureka's Global Dynamics. The two of them have had a "will-they-or-won't-they" loveline since the "Eureka" pilot.

"What I feel comfortable saying is that there is definitely a love interest for Carter this season, and maybe a bit too much of it," Paglia says. "So decisions will have to be -- decisions have to be made.

"(But) we're not going to string you guys out any longer. Let me just say that."