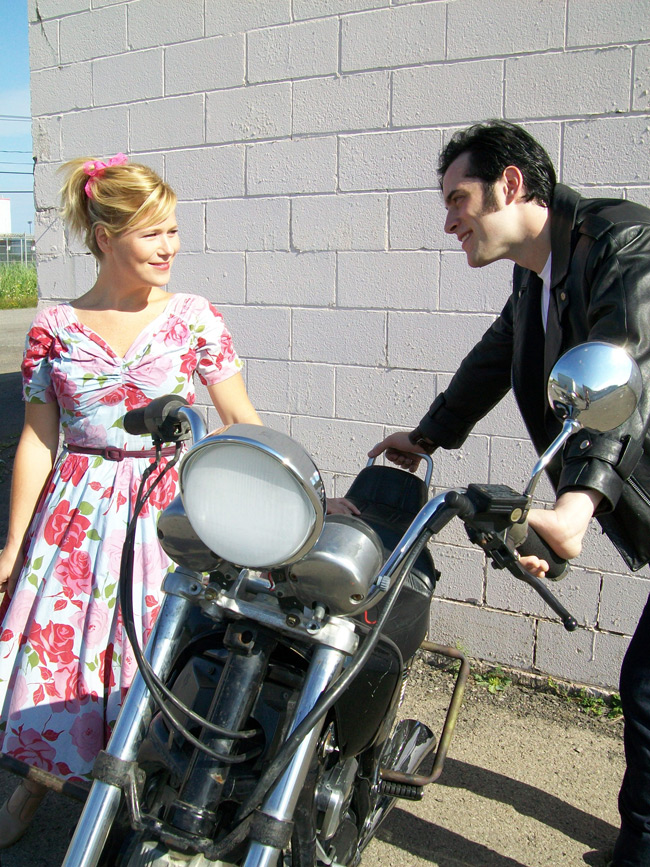 'All Shook Up' over Artpark's summer musical

Love story is more than meets the eye

Remember last summer, when the Pharaoh in Artpark's "Joseph" resembled a larger-than-life, almost cartoon version of the "King of Rock ‘N' Roll"?

Well, this is so not that.

But, those theatergoers expecting to see more of the Elvis-type Artpark displayed last year in next week's production of "All Shook Up" need not fret. Chris Critelli, who plays this version of "E," says the upcoming show is well worth an investment of time and ticket money. Calling the storyline intricate and sharply funny, he says, "There's a lot more to this show than one would think on first glance."

For starters, he's playing the Elvis-inspired Chad as a three-dimensional person, not a musical revue stereotype.

When was the last time anyone saw someone like that on stage?

"All Shook Up" is based on the book of the same name written by Tony Award winner Joe DiPietro. The musical, set in 1955, borrows the love story of Shakespeare's "12th Night," the swagger of James Dean, and the drive and passion of a young Elvis Aaron Presley (not to mention his songs "Heartbreak Hotel," "Love Me Tender" and "Jailhouse Rock").

"It's strikingly relevant," he notes.

Set against a backdrop that includes racial inequality, "All Shook Up" is the story of small-town Natalie, a girl desperately seeking someone to call her own.

"Her passion is motorcycles and working in her dad's garage," Anderson says. "She's really good at it." At the same time, however, "She also wants to fall in love. She wants those two passions to combine."

Enter Chad, who, at first, resembles the over-the-top Elvis we've all seen before. But, Chad "has a tremendous arch" in the story, Critelli says, and grows into someone worth more than the grease in his hair and blue suede in his shoes. The actor's goal is to play Chad as someone who is "real and honest."

While Chad is evolving, so to speak, Natalie does her best to show him her worth.

"She does everything for him to see who she really is," Anderson says. Of course, she also dons a beard at one point, but that's another story.

Critelli and Anderson say "All Shook Up" offers more full-company numbers than your typical Broadway show. Choreographer Lynne Kurdziel-Formato likes to layer, they say, and that means at any given point "there will be six different things happening," Anderson says.

"It's a feast for the eyes," Critelli adds.

The two actors couldn't be happier with Kurdziel-Formato, director Randy Kramer (whom they call a master collaborator), or with a cast that includes Emmy-winning television star Sally Struthers.

"Everyone is just so much fun," Anderson says.

Though the actors have only been in town a few short days - resulting in an "intense" round of rehearsals - they both agree the process has been a joy.

"It's been really fun" Anderson says, suggesting the pressure is resulting in a tight-knit cast and crew.

"It (is) a great experience," Critelli says.

"All Shook Up" is on stage the weekends of Aug. 12-22 in Artpark's Mainstage Theater. For more information, or for tickets, call 754-4375 or visit the Artpark Web site.