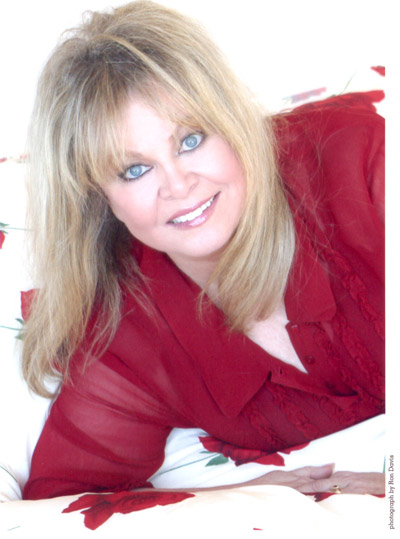 On stage and in person, Sally Struthers is a delight

Seeing my last name, which ends in a vowel, and ascertaining that I am, in fact, Italian, she is determined I visit the country of my ancestors.

"Somebody asked me yesterday where my favorite place I ever traveled to was, because most of my trips outside of the U.S. have been to Third World countries with Save The Children, and I work so much that a vacation usually for me is staying home," Struthers says. "But every once in a while I do pick my sorry bones up and go somewhere, and I was saying yesterday to my friend, Ricky, that my favorite place on Earth that I've ever visited -- that I could go back in a heartbeat and live there the rest of my life -- is Italy."

"Have you been yet," she asks?

Not yet, I respond.

Struthers most recently went to Italy with three Italian-American friends. The foursome rented a 15-person van (extra seats for extra luggage), which Struthers drove. She was the only one who could manage the stick shift.

"It was so much fun," Struthers says. "We drove around Italy for three weeks. They called me ‘driver.' ‘Yo, driver!'

"I had the time of my life, because I was with someone else who knew their way around and knew the language."

During the past two weeks, Struthers has learned the language of Lewiston. In town to star as Mayor Matilda Hyde in Artpark's production of "All Shook Up," Struthers has made it a point to walk Center Street and get to know the locals.

Though Lewiston is somewhat smaller in size and stature than Italy, Struthers loves the historic village just the same.

"It has been divine," she says. "These are the times that I wish I could win the lottery and buy a couple houses in different places that I have gone to, that I didn't know existed, and that I've fallen in love with.

"I would love to have a getaway place here. It's just an amazing place. Everybody is friendly; all the houses are beautiful and charming. Just like Italy, I haven't had a bad meal here. All the restaurants serve great food. The scenery is gorgeous.

Likewise, theatergoers at Artpark couldn't ask for a better Mayor Matilda. Struthers, perhaps best known for her role as Gloria Stivic in the classic television series "All in the Family," is an Emmy and Ovation award-winning actress who knows the role inside out and backwards.

"It's, for me, a very fun, easy role," she says of the part she played last year in Ogunquit, Maine. "Mayor Matilda Hyde is a riot. She's just a riot. She's so uptight.

"That's a delicious character to sink your teeth into, you know? To play somebody so opposite from who you are, because I'm anything but uptight. I'm a born clown, and I'm loud, and I'm fearless. And I'm up and down the main street in Lewiston; I'm popping into stores and restaurants and doing insane things to make whoever is inside laugh."

When I do get to Italy, I must do the same. Oh, and Struthers says I have to send her a postcard.

"I don't care if it's five years from now," she says. "If I get a postcard from Josh Maloni, I will know it's you, I will know you're there, and I will do a little dance in the street."

In "All Shook Up," Sally Struthers plays the offbeat, dictatorial Mayor Matilda Hyde, Chris Critelli stars as the Elvis-inspired Chad, and Carey Anderson shines as the lovelorn Natalie. The show continues through Aug. 22 at Artpark. For tickets, call 754-4375 or click here. For more cast interviews, visit the link below.